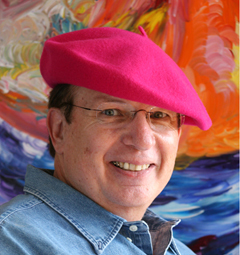 Ralph White, born and raised in Southern California, is one of the premier creators of contemporary Fusionart in the Los Angeles area. Ralph has developed a distinctive style using strong and vibrant colors, and his art reflects a positive flow of energy. Ralph’s works exhibit outward expressions of feeling and celebrations of the inward journey of thoughtful introspection.

Ralph’s process is one of being at play; freedom and meditation without judgement. What becomes of the paint placed upon the canvas is up to his soul’s expression or emotion at the time. Ralph’s own style and technique interpreting the creative force within is what transpires into a painting.

A believer in the artist’s ability to create a dialog through each image, he is continually intrigued by the convergence of art and the observer. An executive business coach, Ralph White brings a lifetime of transformational thinking into his paintings. He has worked with thousands of clients over the years to re-direct their thinking to see possibilities and create change. Ralph brings this philosophy into his art, continually seeking to express the soul’s ability to evolve. His goal is to evoke a spark of creativity and imagination with his audience. When they see images or have an emotional response to his work, his intention is accomplished.

My work is about the journey, about experimentation with both materials and the spirit. I invite you to look for your own connection to the work. My paintings exist as an opportunity for the viewer to imagine, to seek, and to find his or her own life story within them.

Acrylic on canvas, 24.5"x34", 2010 ~ A joyful interpretation of a cosmopolitan underwater community.

Acrylic on canvas, 18"x18", 2007 ~ The creation of fulfillment is blended with chocolate-flavored benevolence.

Acrylic on canvas, 24"x30", 2010 ~ An artistic expression of the classic story of the mustard seed. All it takes it one small idea to transform the lives the many.

Acrylic on canvas, 24"x30", 2014 ~ The evanescence of symbiotic sea creatures in a vibrant display of aquatic life.

“Moths in the Light”

Acrylic on canvas, 24"x30", 2015 ~ An illustration of layers leading to an undiscovered realm in our souls.

Acrylic on canvas, 36"x48", 2008 ~ Charged up with energetic fusion and wild echoes of expression.

Acrylic on wood board, 16"x20", 2012 ~ Lively vibrations and expressions of forward-thinking.

A representation of the boundless sea.

Acrylic on canvas, 24"x30", 2015 ~ Shades of serenity drifting in from a treacherous voyage eager to discover a parallel spirit to envelop.

Acrylic on wood board, 18"x24", 2015 ~ Shallow peaks of volcanic colors billowing beneath the earth.

Acrylic on canvas, 24"x30", 2007. ~ Pushing forward with perseverance until a grand entrance is made onto the shore of possibilities.

Acrylic on canvas, 48"x48", 2010. ~ The colossal depth of the sea creating a universal connection of power.

Acrylic on canvas, 30"x40", 2009 ~ A blending of prehistoric cave paintings with the spirit of the American West.

Acrylic on canvas, 40"x30", 2010 ~ Timeless in this modern world, illuminating highs, lows and middles of life.

Acrylic on canvas, 30"x40", 2009. ~ Surges of energetic precipitation cascading from sunbeams in the sky.

Acrylic on canvas, 30"x40", 2009. ~ The conflux between corporate rigidity and the creative thought behind entrepreneur pursuits.