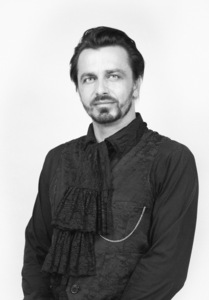 Zelko Nedic’s current photographic art works, created using the time consuming, process heavy technique of wet plate collodion photography, pays tribute to his energetic career and deep passion for image making. This new work, Dot.com, signifies all Nedic’s previous works be the foundation of what is to follow and positions his current work right at the point of arrival – utilising the places he has travelled in his personal (and public) story.

The presence of a contradiction between control and risk taking is apparent in most of Nedic’s works. A teenage witness to the horrors of the Bosnian War during the early 90s, Nedic knows what it is to experience a local hell and to escape into imagined havens. Through his collodion images and his earlier works, many reminiscent in texture (but not as extreme in content) of Joel Peter Witkin’s macabre tableaux, Nedic takes us to the edge and out into a world of restrictive possibilities.

In his earlier series, Things Around Me, amongst the benign images of a lone chair or lamp, are the more intimate images of a cut hand or a cracked and stained hard-boiled egg. From there he offers up a flamboyant side of life with portraits of a topless woman in a gas mask, a prima donna on her veranda, and a man dressed in a naked woman’s body suit. In his series, Cleansing, hauntingly reminiscent of the 1993 Rolf de Heer film Bad Boy Bubby, Nedic wraps his subject’s body in cling wrap, but unlike in the film where death results, Nedic gives his audience a glimpse of a new life, new breath through ‘cleansing’ via a constrained and potentially deadly process.

In his wet plate collodion works, along with the usefulness of ambiguous narrative learned on set as a professional hair and makeup artist/photographer on high-end fashion shoots, Nedic provides his audience landscapes buoyant with symbolism and references to social norms obscured by absurdity. These exquisite, hand coloured photographs reference numerous art styles and movements including the iconic religious works of the middle ages, indigenous Australian dot paintings and early nineteenth-century photographic tableaux. In addition, the images are steeped in a sense of pop culture with a Warhol overtone, through the reproduction of something familiar.

Despite the long exposures and the chance style of Nedic’s choice of medium, the new series Dot.Com consists of staged photographic tableaux that are highly directed, with tight choreographic decisions. These artworks disrupt old discourses by creating worlds of intense theatrical erotica and isolated intimacy within compositions we already know. This is evident in the work Forgiveness, a self-portrait classically referencing Christian art. In this image Nedic places himself in the arms of a female saint – The Mother: The innocence of his naked torso interrupted by gritty tattoo art and a golden halo behind the female saint like a moon rising on darkness. Another image, Inner Scream, reveals Nedic’s penchant for feminist undertones in his work. The subject appears to be in the act of ‘fisting’ – her mouth full of her own hand, unable to speak, her hair covered with a veil and the scene set like a peep show crowned in a halo of stars.

Nedic’s latest works of wet plate collodion photography was a choice of medium to immerse him into his storytelling. The instant world of digital photography was no longer enough and Nedic wanted to feel less in control of the outcomes by cutting the aluminium plates, mixing the chemicals, sourcing props and costumes and enduring the long exposures. The result is a series of photographic tableaux that reflects the old Serbian saying that ‘life is a theatre’. For Nedic, photography is his stage.

His personal work has bought him to working in 2010 with Head On to document the Mardi Gras Festival. His practice of documenting Sydney life saw him invited to present work for the Australian Centre for Photography for the Subculture Slide night in March 2010. In 2011, 2014 and 2015 Zelko Nedic was one of the finalists in Moran Contemporary photographic prize. In 2013 he was finalist in the prestigious National Photographic Portrait Prize, National Portrait Gallery Canberra.

Sometimes life flows seamlessly from one perfect moment to the next, but often times we face struggles, insecurities and setbacks that leave us broken. And we wonder what will become of the pieces.
We live in a world today that sees broken things as unworthy of our time, unwanted interference in our lives. The art of repair something and in the process making it more beautiful tells us that it is fine to have flaws. This aspect involves the urge to express the profound esteem felt for rejected, forgotten objects to give them the status of exclusivity and nobility.

The series ''Golden Scars" came as inspiration from Kintsukuroi, Japanese art of repairing pottery with gold or silver lacquer and understanding that the piece is more beautiful for having been broken. I want to stimulate viewers to think, to make their own interpretations and associations. About who and what we are and why we act the way we do. I have been working on this series using an aluminium plates from the skip and photographing my subjects by 80 years old Eastman Kodak large format camera.