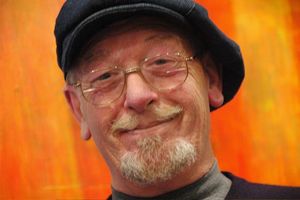 Born in England, Morant worked and exhibited in London until 1973 when he moved to New Zealand and settled in Christchurch. He has drawn and painted obsessively for as long as he can remember and, while classically trained, has always followed his own path of individual expression.

In 1985 he was awarded the New Zealand Montana National Art Award. However, while he is a Nationalized ‘Kiwi’ and full-time painter, he has travelled extensively and considers himself more than just a regional artist.

He has won many International awards. These include the 2007 Florence Biennale Lorenzo Il Magnifico Award. ‘Premio alla Carriera (Lifetime Achievement in Art.) In 2008 he won the ‘Premio Ercole D’Este della Critica (Critics Choice) award and in 2009 he was honoured at the Premio San Valentino International Art Exhibition with first prize, ‘President of the Republic’s Medal’(Italy).
2010 and 2011 saw him honoured with awards for services to art in Ferrara, Italy. In 2013 he received with The `Peoples Choice Award` at a Trevisan International exhibition held in Bologna and a special award and citation from the Vajra art project in Nepal.
In 2014 Morant exhibited in Bologna again and held a solo show at Materia Grigia gallery in Venice. In New Zealand he held a special exhibition at Eastside gallery, Christchurch, New Zealand of seventy new works in celebration of his seventieth birthday.
2015: Awarded ‘Certificate Of Excellence’, Palm Award, Leipzig, Germany. Also this year he won a Manhattan Arts International monetary Award in ‘The Healing Power Of Art’ exhibition, New York. In 2016/17 he also won the ‘Excellence in Art’ award for work in the Manhattan exhibition, ‘New Beginnings’.