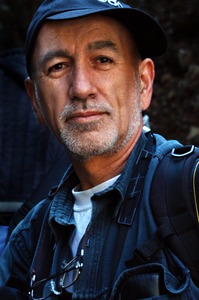 Born in Dibër(Debar- FYROM), on May 3rd 1951. After finishing high school in his hometown, he studied in the class of professor Nikola Tanhofer, in 1975, at the Academy for Theatre, Film and Television in the University of Zagreb. In 2007 he got the degree Master of Arts at the Zagreb University. During ‘70s, ‘80s and early ‘90s, worked as a cinematographer and director of photography at RTP (Radio Television of Pristina), and KosovaFilm. From 1981-1983 he worked as an external associate at the Faculty of Arts – Pristina, as lecturer of Photography in Design Department. He was a member and president of many professional juries in the field of film and visual arts during 1981- 200. Afrim Spahiu worked as photographer – designer and manager of many artistic and commercial projects, from 1990 -2002. During the period 2000 -2002, he worked as lecturer of Photojournalism in “Faik Konica“ journalism school. From 2002-2005 he worked as lecturer and manager of the Institute of Film and Photography, “Gjon Mili” – Pristina. From 2007–2009 he is a lecturer on Analog -Digital Photography and Movie – Television Photography at the University AAB, Tetovo State University, and University Evolution in Pristina. From October 2009 he works as a lecturer on the Analog -Digital – Still Photography and Movie – Television Photography in H.P.S. Evolution-Pristina; Faculty of Arts – Pristina; International Balkan University – FYROM. He worked as director of photography in many feature films and documentaries, a number of which were awarded in international festivals. He participated in many individual and collective exhibitions. He is the author of many monographies. He was awarded a number of international prizes in photography.

Afrim hasn't uploaded any images yet. Please check back soon!