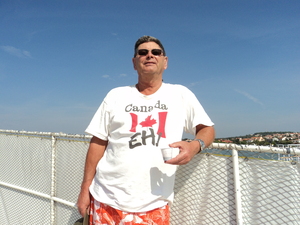 Born in Bradford, Yorkshire, England, John immigrated to Canada with his parents in 1952. Raised in Kingston, Ontario John graduated from Queen’s University with a B.Com(Hon) degree. While at university John worked as a commercial pilot. John is a veteran of the Canadian Armed Forces having been in the Airforce as a pilot and the Army Reserve as a Medical Administrative Officer.
Leaving the Forces in 1980 John started his next career as a Human Resources specialist and Management Consultant. He received an MBA (Organizational Behaviour) from the University of Calgary and lectured part-time at universities both in Calgary and overseas. John has lived in Calgary since 1980 and has worked both in Canada and internationally in countries such as Israel, Egypt and Cuba.
John retired from Management Consulting several years ago to take up landscape painting as his next career. He spends time searching out spectacular views and then paints them. He draws his inspiration from the majestic splendour of the Rockies, although every once in while his Saskatchewan background creeps in and he is forced to paint wheat fields and hay bales. He paints Canadian Landscapes to reflect the magnificent beauty of nature. Although true beauty cannot be captured, it can be reflected and that is what his artistic endeavour is all about. John now displays his art in galleries and gift shops in Calgary, Banff and Lake Louise. Although he started painting later in life John showed his artistic talents earlier with flower gardening. Over the years John has won several awards from the Calgary Horticultural Society including the award for “Best Newly Landscaped Garden by Owner in Calgary” in 2008. He is a member with “active” status in the Federation of Canadian Artists. He can be reached at abbottj@shaw.ca and his work can be viewed on-line at ABBOTTfineART.com.