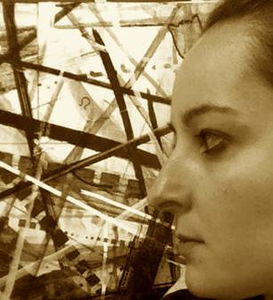 Eleanna Martinou was born in Athens (1981). Studied at the Athens School of Fine Arts (2006) and graduated with a MA in the Arts (2009). She has exhibited her work in solo and group exhibitions, art fairs and festivals in Greece and abroad.

Sotirios Bahtsetzis is a writer, curator and lecturer. He is currently Adjunct Professor in History of Art at the Frances Rich School of Fine and Performing Arts of the Deree - The American College of Greece, Athens

"Everything is rythm, the entire destiny of man is one heavinly rhythm, just as every work of art is one rythm, and everything swings from the poetizing lips of the god."According to Giorgio Agamben this statement by Germanromantic poet Friedrich Holderlin derives from a period of his life, 1807-43, that philologists usually define as the years of the poet's insanity. However Agamben finds in this one fragment of the poet's "incoherent speech" the "power that grants the work of art its original space". How is this so? Agamben explains:"Yet rhythm -as we commonly understand it- appears to introduce into this eternal flow a split and a stop. Thus in a musical piece, although it is somehow in time, we perceive rhythm as something that escapes the incessant flight of instants and appears almost as the presence of an atemporal dimension in time. In the same way, when we are before a work of art or a landscape bathed in the light of it's own presence, we perceive a stop in time, as though we were suddenly thrown into a more original time." The philosopher's meditation allows for a distinction between time understood as an infinite numerical succession and time as a momentous presence. The first can be symbolised by our chronometers and the second by the metronome, the device which, while producing regular, metrical ticks, helps musicians to internalize a clear sense of timing and tempo. This double figure of the chronometer versus the metronome can help us to umderstand the semiotic operations in Eleanna Martinou's painting.

The visual artist, a studied musician, often refers to the notion of rhythm as the underlying conceptual principle of her paintings. This is already visible in a 2005 series of paintings which constitute endess chromatic variations of an archaic Kouros, or in a 2008 series of mainly black and white portraits, which were conceived in accordance to the black and white keys of a piano. Martinou's paintings are visual equivalents of a perpetual dialectic of junction and disjunction or of relation and scission that incribes the body in a continuum of space and time. Manual dexterity and the meticulous application characterize Martinou's body of work. However we wouldn't describe these paintings as grids, a term which resonates rather with the architectural concept of a structure or a scheme. They are rather kind of a maze, or a spiral, which confronts the viewer with the endless occupation of the artist's body with her chosen material. This endless handcrafting, in which the artist seems to translate labour that affects the sences into thinking and vice versa, epitomises the notion of the work of art as rythm. Martinou's work is closer less to a language of architecture than to the language of nature, which according to Aristotelian physics, is rhythm that is, as the original principle of presence. This is probably the reason why we experience these "stops in time" as a more original time, something like the time, which occurs in meditation, or the recursive time of psychoanalysis, or, even better, the impossible time of being in love - probably the ultimate expression of life's rhythm.

After a great change in my personal life, a new set of works began: The face itself is the network and the maze, where every person, when closing their eyes is the cluster of thought and wandering. The process does not need violence anymore, but with water and watercolor materials, it follows the natural flow of things.

A feeling of documenting or archiving the everyday.

Faces that form networks - networks that form faces. Eleanna Martinou in her most recent work, approaches the function of the mask as a social facade by presenting two installations: One of watercolors and a sculptural, three dimensional one. Drawing her portraiture from facebook, the artist creates a wider grid for each of the masks. The transparent nature of the watercolor reveals the camouflage and this way the interpersonal relationships and the online friendships are depicted as a network full of empty spaces and flaws. On the points of connection, the color reflects the rhythm and the emotion, always in the poetic idiom that characterizes her work. The Eyewitnesses are constructed by malleable connections, connections on the verge of fragility and they seem to be fluid just like their gaze.
Eleanna Martinou this time too continues to explore the concepts of network and rhythm, as in her previous solo shows.

My intention when I work is to realize the wold existing in my imagination. The sense of time is lost and memories and images of fantasy and dreams intertwine in a network.

Until recently, through an effort to defend myself by forcefully enforcing my presence in the world, works have emerged where the process itself was a lasting escape from the existing reality. One of these actualizes fantasies is the series of Imaginary Metropolises where anger was the vehicle through which I attempted to become lost in a journey through space and time.

The body itself, condensing in the gesture anger and the fantasy for a journey in time, gets to be portrayed as a conflict of white and black, in constant rotation and competitiveness. The surface was always an impenetrable wall where the sound of percussions often accompanied the composition.

The result was a series of large-scale works consisting of superimposed surfaces, a set of grids, among which often elements that refer to Prisons, Stairs and maps of Metropolises are distinguished; all these reffering to dystopia.

The thematic unit Imaginary Metropolises explores the hybridisation of individual and social identities in contemporary cities.

I am interested in illustrating the construction sprawl across the planet, a mesh of itineraries, a different aspect of the face, individual choices of different destinations on a path of unknown beginning or end. I attempt an artistic mapping of chaos.

The body of works depicts the random drift in the big city, on traces branching out like streets on a map.

The situationist drift is the structural element behind the construction of images where multiple layers of events create a mesh of intersecting trajectories, whose densities increase or decrease like in music.

With the abolition and reconstitution of form evolves the idea of a new global community, without beginning, middle or end.