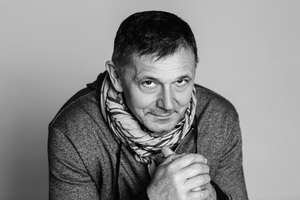 He lives and works in Poland. He has presented his art at more than 85 individual shows and participated in more than 140 collective exhibitions in Poland, Europe and the USA. He is a member of the Polish Pastel Artists’ Association, a member of the ZPAP- The Union of Polish Artists and a honorary member of the Pastel Society of America, NY.
He has organised and participated in numerous plein-air meetings in Poland and abroad. He was a curator of a famous exhibition of Józef Czapski’s works held at BWA [Art Exhibition Office] in Nowy Sącz (1991) as well as shows of Nejad- a prominent Turkish abstract artist. His numerous articles on art criticism have appeared in most import_ant newspapers and magazines like 'Gazeta Wyborcza' or 'Tygodnik Powszechny' and in catalogues accompanying exhibitions. He has taught at all levels of the educational system. He was a manager of art gallery- 'Mała Galeria' in Nowy Sącz, President of Pro- Art Foundation, Secretary and Vice President of the Polish Pastel Artists’ Association. His works have supported numerous charity campaigns such as 'Chcę pomagać [ I Wish to Help]', 'Bliźniemu swemu [For Thy Neighbour]', 'Ziarnko gorczycy [Mustard Seed]', 'Sursum corda', 'Stowarzyszenie rodzin zastępczych [Foster Family Association]' and dozens of individual events helping people in need. His works can be found in private and public collections in Poland, USA, UK, Germany, France, Italy, Norway, Finland and Australia.

“Morning on the beach”

“The Sun over the City”

“Searching for a Solution”

“Terrace in the Light”