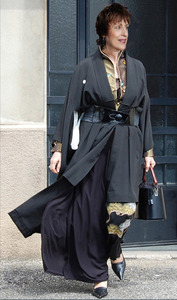 She spent one year in Brazil and worked with the painter Roland Urbinati, particularly in abstract art and acrylic.
Has presented several individual exhibitions and participated in collective ones in Lisbon, Oeiras and Sintra (Portugal),
at the Cultural centre of Lomé (Africa) and in France,
where she won a bronze medal at the International Plastic Art Salon in Béziers.

In 1993, exhibited in Santiago, Chile where she lived.
In the same year, she joined the International Association “Plastica Latina” in Chile, the head office of which is in France.
In this context, she participated in the XXII “Val d’Or” International Salon in St Amand Montrond in September 1994.
In the catalogue of the exhibition the jury wrote: "We are happy to welcome this artist whose mastery of the technique
and the balance of her composition combined witha beautiful harmony of tones, gives her work a dreamlike poetry".

In 1994 she participated in the Buxières Les Mines's international Salon, invited by the International Association, Plastica Latina.
From 4 to 28 October 1994, she was selected to participate, at the Santiago University of Chile, in the second Salon of Painting
and Sculpture of the aforesaid Association.
In October 1995 and 1996 she took part in the International Salon in St Amand Montrond and in February 1996 exhibited at the Herouet Gallery in Paris.

In March 2002 she exhibited to the Gallery Vire-Vent in PARIS and september 2003 where she won a "prix public".
In june 2005, she exhibits to the Gallery Art's & Miss in Paris.
She’ll be registered in December 2005 in the Dictionary of Listed Painters, designed by Drouot Cotation and distributed by Larousse Group
In march 2006, she exhibits to WALDORF Hotel in London and June in New york.

In 2007, she exhibits in New York, in Sardaigne ( Italy ) and Paris to the Gallery Art' & Miss and to the Carrousel du Louvre.

In 2008, she exhibits in Paris to the Gallery Mona Lisa.

In 2009, she exhibits in paris to the Carrousel du Louvre.

In 2010 and 2011, she exhibits to the Gallery Vire-Vent in PARIS Montmartre and Porto Viro italy.