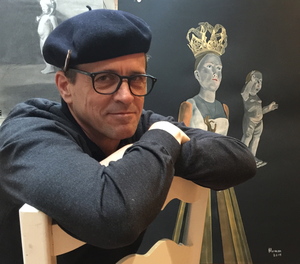 Philipp Rudolf Humm (b. 1959, Saarbruecken, Germany) is a Belgian/German painter and sculptor, based in London.
Humm was a painter from young age on, yet after not being selected by the Akademie fuer Bildende Kuenste in Berlin, pursued a successful business career as entrepreneur and executive. Since 2015, Humm has become a full-time artist. He studied life painting at the London Fine Art Studios and sculpture at the Fine Art Academy in Florence. Humm has also a BA in Philosophy and a MBA.

As contemporary narrative figurative artist, his art bridges the divide between classical painting and modern art, merging classical painting techniques with Pop elements, to create a new style which the acclaimed art critique and historian Edward Lucie Smith labelled “Pop Expressionism”. Humm sees himself as a witty chronicler of our society.

humm hasn't uploaded any images yet. Please check back soon!