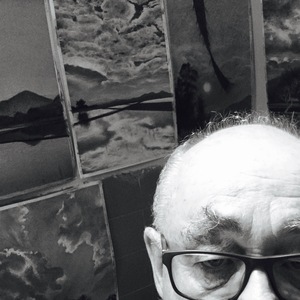 In 2014, after 25 years as a graphic designer, producing designs on computer to other peoples specifications, for print, web, but especially animated video graphics, I have returned to my first love of producing by hand, on paper, works that express my feelings, needs, divertissements.
I am fascinated by the interplay of nature and the built environment. The transient, the overlooked, the space between. Mutable elements: sky, water, the play of light and shadow. Using an iPhone as a sketchbook, I capture the transient moment, looking for the magic and mystery in the mundane, at the intersection of the natural and the built, hinting at a peripheral reality, a possible narrative.
Predominantly taking my subject matter from Sydney’s (Australia) inner west, centering on Sydney Park and Newtown, and now in my new home in a small village outside Chiang Mai, Thailand, I interpret using expressive marks to reflect the visual reality. It is a direct approach, interpreting what I see, unconsciously investing a possible depth, a narrative which must be interpreted by the viewer’s imagination.
I work on paper, mostly using pastel, with some watercolour and ink elements. all works are approximately A1 size. Recently I have also begun working in acrylics.

These are from around my new home in Chiang Mai, Thailand and some earlier ones from around Thailand

“A dance of earth and air”

“A conversation with the night”

“A bend in the moonlight”

“Reflections of the night”

“Still life in the afternoon”

“A dragon in the sky”

“Last car to leave the dam”

“Pagoda of the little fishies”

“Mondrian in the morning”

These are works in Sydne and environs, especially Sydney Park

“And so it flows”

“Encounter by the river”

“Guardians of the flow”

“A river to float away on”

“There is a path”