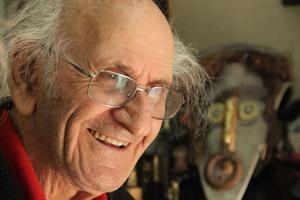 Born in 1925 in the village of Racacun, Romania, Motke Blum was only a teenager when the Nazi regime invaded his home country and sent him to a forced labor camp. More than once during his time in the camp, Motke’s art saved his life. After four years, he escaped the labor camp and fled on one of a cohort of three immigrant boats. One of the other boats, the Mefkuri, was sunk by a German torpedo during the journey, an event witnessed by Motke that later influenced his art.
Upon arriving in Israel, Motke settled on a kibbutz in the north until 1946, when he moved to Netanya to work as a plasterer. During these years, he continued to dream of one day becoming a professional artist. Shortly after the War of Independence in Israel Motke Blum moved to Jerusalem and began taking evening painting courses at Betzalel Art Academy. In 1951 he enrolled in the full time program and went on to graduate with honors in silverwork, enamel, sculpting, and painting. While at Betzalel, Motke participated in an UNESCO-sponsored course for restoration of ancient mosaics and frescoes, and won the Sonnenborn Award for the Eternal Flame that was purchased by the Zim Company to be used on one of its ships.
In 1956 Motke’s art took him to Holland to study design at the Royal Silverwork Institute in Zeist. Then in 1958 he returned to Jerusalem where he set up his permanent studio.
Over the next sixty years Motke continued to create art inspired by the cities he’s lived in and the experiences he’s had. His work has been commissioned by institutions and various people in Israel and abroad including Israel’s Ministry of Justice and Ministry of Tourism, and the Congress and Senate in the United States. His work also illustrates the covers of many books including a new edition of the translation of the Bible into German by Buber and Rosenzweig, Psalms by a Swedish publishing house, a biography of a Slovakian underground fighter, and a renewed edition of Agnon’s writings in English.
In 2005 Motke received the Ish-Shalom Life Achievement Award and in 2007 Motke’s work was chosen as the leading images of the international Holocaust project “The Secret Flame of Hope.”
In 2009 the municipality of Mainz in Germany commissioned an exhibition of Motke’s work to commemorate the International Holocaust Memorial Day, and in 2016 The Los Angeles Museum of the Holocaust held a special exhibition on Holocaust Memorial Day in honor of Motke's 91st birthday.

"To give the white colors perspective, the internal reserves must emerge from their anonymity. The white has a royal simplicity and is the absolute color of nature—the fusion of all colors through the prism. In order to provide the white mass and texture I must search within myself constant renewal, which will brighten the white colour and give it light. Such renewal rises from the depth of my outset experiences and soul, which have been covered by a long time layer of gray dust.
My ancient sights of the soul were brought out to the shining light and were shaped into the white texture, muted hues in pencil, which give the white airiness and structure.
It's a never ending experience in color and shape – there are always new techniques to be found, new shades I have not experienced yet, new shapes portrayed in my mind. Sometimes I should distance myself in order to find the perspective – to break my own boundaries into distant worlds, in order to find inspiration. I attempt to break out, to re-examine the Black and White concept and create a comprehensive color spectrum from within the shape and content."

“Arise, shine, for thy time is come”

“Commotion in the shtetl”

“View of the Holy City of Jerusalem”