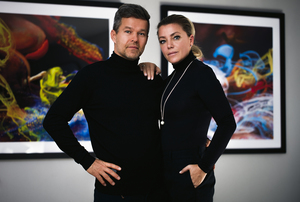 Mike and Madeleine Bülow’s work, is a multimedia work, and consists of several working steps, which deals with the coincidence, flowing paint, and the laws of nature. In the process, intuitively explore the emerging small paint sculptures, in three-dimensional space, in a liquid. Important in their work is the perspective, and the view of the object that is created. Because each perspective, lets the subject, appear differently, for example, by light and shadow. The coincidence is thereby a fixed constant, to repeat nothing, to innovatively re-create, and compositions of colors and shapes emerge, which can not be conceived. They create a basic situation, by introducing color into a liquid. Later, their intervention is minimal and limited to a few drops of color that are intuitively brought into the action.
However, it is not, as in automatism, without intention. It is the intention and tasks position that determines the outcome of their work. This sharpens the senses to capture the emerging through artistic photography. Thus, for example, music of Claude Debussy, but also electronic music becomes the subject. But also visual events are used for research, examined and compared. Thus the photographs of the Hubble telescope serve, likewise for intuitive interpretation, their work. With the music it concerns to make sounds visually visible in form and color and to interpret. Their work is completely different from Kandinsky’s, which is on a two-dimensional plane. Mike and Madeleine’s work, in the process of creation, is just like sounds moving through space, a three-dimensional sculpture, of paint, also moving through space, and currently can only be made visible through photography or video. Since these objects are too fleeting and too small to be captured by the naked eye.

Artist statement
Our work is not just about beautiful colourful pictures. No, it is much more an exploration similar to the exploration of the universe, with the telescope, only that we create this universe that we explore ourselves! We act intuitively with what happens, what we see. The intentional coincidence is a fixed constant in our work, in order not to become predictable, and to give what happens its own evolution. In doing so, we uncover an otherwise invisible reality that would remain hidden to the human mind and eye. Our work involves several steps, based on the creation of a situation through paint in a liquid, to which we then have to react, change and accept. This situation is then photographed and printed as a unique fine art print. The exploration of space, in which paint unfolds freely, and only through slight intervention, in which we intuitively and consciously add new drops of paint to influence the situation, gives us the opportunity to create something, and to participate in creation. The question arises why space, form and colour, but also light and shadow work in certain constellations. It seems that nature has a template of forms for this. Since recognisable shapes emerge again and again.
Art is an activity that must be experimental and open!

Coincidence on purpose!
How important is chance in art? I maintain that chance in art is one of the most important challenges of our time. Otherwise we will drown in repetitions! The art market is full of repetitions, in slightly different form and color. Innovations are those that are triggered by chance and are accompanied by an incredible creative force that we usually cannot grasp with our minds. Just as one can trust that a tree will grow from a seed, one must also trust that something new will emerge from an intention. The very intention to create something new is the seed that will grow through chance and exploration. Expecting a result clouds the view of what is actually in front of you! Also, the misconception of control must be set aside, because just the angle of view, can make an object seem changed. Something new, which was created by chance, must be recognized and viewed from all perspectives. It is important to look at it intuitively with the feeling and not with the mind.
An artist should be an explorer who finds the invisible!

Madeleine Bülow, was born in Magdeburg in 1978, she experimented a lot with coloured pencils in her youth. Around 2001 she developed a strong interest and desire for abstract art and began working with acrylic paint on canvas. In 2004 she moved to Berlin. From 2004 to 2006 she volunteered for an art project for children aged 3-4, in 2012 she started the project „Symphonies of Colors“ with her husband Mike Bülow. She became very involved in experimenting with colour, suspended in a fluid medium of her own creation, directly connected to music to create an aesthetic experience, and to pursue a vision of representing music visually. She has participated in many exhibitions, biennials and art fairs throughout Europe and other parts of the world. For example in Berlin, Leipzig, Hamburg, London, Salzburg, Florence, Ibiza, Cannes, Paris, Madrid, Barcelona, Vienna, and Shanghai.

Mike Bülow, born in Zossen in 1974, moved to Berlin in 1985, has a musical background and has worked with numerous record companies for 30 years. He released 4 albums and 16 singles on labels such as MfS Records, Flesh, Universal Music, Sony and Warner. He worked with Marcos Lopez and Bernard Sumner from the British band New Order, Armani & Masto (The Sound of Sage 2 – Taxi 4), Masto & Cain for Dream Dance, Berlin Bitch for Universal Music and he had many performances for the Love Parade in Berlin, performances at the E-Werk in Berlin. Also a performance at the music festival in Cannes.
He started his career as a photo artist with the project „Symphonies of Colors“, which he started in 2012 together with his wife Madeleine Bülow. They began experimenting with paint suspended in a liquid medium to create an aesthetic experience. The works have been exhibited all over Europe and the world. For example Salzburg, Berlin, London, Ibiza, Leipzig, Cannes, Paris, Madrid, Barcelona, Vienna, Hamburg, Florence (Biennale), Shanghai.

Mike and Madeleine Bülow have been married since May 2013.

Mike and Madeleine Bülow hasn't uploaded any images yet. Please check back soon!