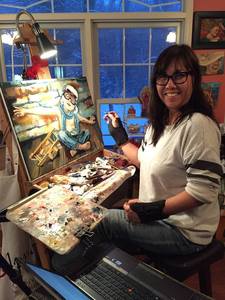 Roxana Gonzales was born in April 15, 1963 in a small town in North Perú called Chepen. She is one of four children raised by loving parents in a calm environment , Gonzales took an interest in literature, writing and art at an early age. Roxana would observe people around her which would inspire fictional stories in her notebooks, and making portraits of her friends to go along. At the age of 6, she created her first oil painting along with her pet.. After that exciting experience with a brush she then continued to work on various bodegones and children paintings.

When Roxana ended school at the age of 16 , she enroll at a boarding school for future nurses called “Escuela Nacional de Enfermeras Arzobispo Loayza” today known as Universidad Cayetano Heredia. After graduating from nursing school she married at the age of 20 and gave birth to four children. Even with a graduation degree of nursing she did not worked in a hospital, rather she worked on women development programs and dedicated her time to working with women who lived in the poor parts of Perú..

In 2007 change came when Roxana immigrated with her family to the U.S, for her it was like beginning a new life. It was hard for her to learn a foreign language but she kept trying. The lack of friends made her feel lonely after the end of her 25 years of marriage which made her start painting again. She looked inside herself and found a new door to opened to a wonderful and unique way for her to communicate. She started with pencil portraits for a year, then in the following year she began to give her creations color.

Roxana’s art is mostly focused on women and children. Her skills involve portrait painting, acrylic and oil. Roxana motivation is to show the transparency and innocence of children and the bravery, courage, hard work and unique outlook women have in life.

Roxana has had her work showcase in many galleries and currently has paintings displayed at her web site called Artofadreamer.net and at the Peru Consulate & Embassy in Washington, DC although her work is purely inspirational, she does portraits and commissions for any occasion. She currently resides in Mechanicsville MD. She has hopes of one day owning her own gallery that would be called “Art Of A Dreamer.”