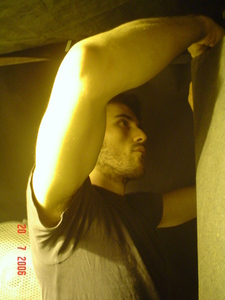 BIOGRAPHY I am a self-taught painter. The passion for drawing manifested itself since my childhood. I started using oil at the age of 18. The starting point of my artistic path are the introspective experiences of adolescence. Through painting I tried to give voice to the chaotic turmoil full of unravelling intuitions and contradictions of adolescence. Between 1998 and 2002 I lived in El Salvador. This experience deeply influenced the evolution of my artistic path. Green is a mark of this period as well as blue is for the adolescence period. STATEMENT The search of Truth obsesses the life of many. But that same obsessing search distracts attention from the very object. Truth is all around us, Truth is right in front of our eyes and it manifests itself with Beauty: the Perfection of Nature. Therefore, if Art is to be a path toward the Truth, artists should be inherently concerned with Beauty. Artists do not create Art. Art is only in the Perfection of Nature. They perceive Art through Beauty and then translate it in their own CLEAR language, that we call art. Artists are translators. "Our language interpose itself between learning and the truth as a dusty glass, a deforming mirror. The Eden language was like clear window, through which a light of full comprehension flowed". (George Steiner, After Babel). "Beauty is truth, truth beauty, - that is all, Ye know on earth, and all ye need to know''. (John Keats)

I am going to upload in this portfolio all my works.

IN UTERO is the desire of wandering in a pristine, unknown and light years distant world to start it all over again. A place where dimensions don't work in the same way as here.
Green is the colour that marked the period i lived in El Salvador.

LAST SUPPER was born as a sensation, a pervasive and pleasant sensation that sprang out of the pages of a book: "One hunderd years of solitude" by Gabriel Garcìa Marquez.
It was during the infinite rain that fell on Macondo.
From those pages came out the imagine of an underwater world and that image ended up fusing with perception of the upcoming end of the world order as we know and live it.
"Last Supper" represents the final and conclusive defeat, the failure of the attempt of controlling the World, Nature and others.
The man (Cosmos) sitting alone, desolate, dejected, resigned, is defeated.
The three-spatial dimensions (Cosmos) are being gained by Nature (Chaos): Chaos and Life are spheric, are all-directional.

Past and future, youth and old-age.
The bird symbolizes adolescence while old-age is represented in the window.
A tear slides from the bird's eye. It' s crying for disappointment, for disillusion, for rage. The real world blights every adolescent expectation, hope and dream.
The bird is free because adolescence does not accept compromises, that is why he faces with his chest out the future.
There is fear in his eye because fear is the state of the origin, of the newborn conscience. Mind was born to overcome the fear of the vacuum, of the unknown.
Old-age is represented in the window: the man alone, slow-pace walking, resigned, overcame, lost and trapped in a boundless, labyrinthic house/Mind where everything is ordered and still.

Living in a so called "third-world" country, as El Salvador, one realizes the concrete way, the sacrifice of people which is the dark side of the system we all live in.

When i was a child, i used to travel to El Salvador to spend the summer holidays. Before landing i remember being astonished by the vision of those green forests seen from above.
When the painting was finished i noticed that the foreground resembles the shape of a jet double window.

This is one of a series of paintings that i categorize as METAPHYSICAL. These paintings are deeply intimate and full of the folly on which everyone's rationality floats.
This one is an example of how paintings seem to have their own life. I started working on this canvas 4/5 years ago. It was supposed to be a simple, unassuming, exercise of geometric figures intersecting between them and day by day, brush stroke after brush stroke, i realized that the painting was dictating what was to come next. Nonetheless, after months of occasional work, I stopped working on it without considering it to be finished; I didn’ t manage to “feel” it. For years it hung on the wall, but never satisfied me, to the point that I was about to paint something else on it. A year ago my wonderful, sunny daughter was born and in August this year, I felt it was time to conclude the work.
UTERUS amazes. It amazes me because I know every single brush stroke hidden beneath the final result, with 5zeros, 4 zeros, 3 zeros etc. brushes (there are thousands and thousands of them). I know every single secret, every single shadow of this multi-dimensional world, in which bi-dimensional planes intersect into each other.
It amazes me because it is not what I ever imagined to do, it is not what I wanted to do. It really “took the shape” it wanted to. It amazes me because the more I look at it, the more references to so many different themes, I find.
I hope it will amaze you too.

This is one of series of night scenes of rural life in central America, where i lived for four years working in a coffee plantation.
I would like to think that, looking at this canvas, people feel the same "beata solitudo" (blissful solitude) the peasant is living, in his austere life, made of few and simple pleasures.

“ONE, NO ONE, ONE HUNDRED THOUSAND”

Who am I?
One of the eternal metaphysical questions, which puts us at the entrance of the most inextricable labyrinth: our own identity, and which goes along with another forever unanswered question: the meaning of life.
To follow these paths means to go deeper and deeper in a realm that cannot but be defined as meta-physical (from greek meta:beyond ) and the color of which is BLUE.

To follow these paths means to go deeper and deeper in a realm that cannot but be defined as meta-physical (from greek meta:beyond ) and the color of which is BLUE.

This is an initiatic ritual.
Nudity represents the beginning; the birth of a conscience.
"And the eyes of them both were opened, and they knew they were naked." (Genesis 3,7)
The ritual fire symbolises the Truth, the centre of the circle. Infinite are the paths that leads from the circumference to the centre yet the Truth is still the same and only one. The dark wood symbolises the unknown which surrounds every beginner, every new-born and which is to be penetrated and unravelled.