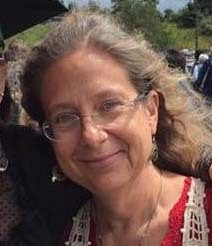 I was born in New York City and raised in Hamilton Ontario CA. I have always been an artist. I can’t remember a time when the awareness of my artistic path was not a significant part of my consciousness. I am fortunate to been born into a family that counts back through several generations of artist’s and I began my formal training in drawing and painting with my parents when I was a small child. After taking a BFA from Antioch/SVA and an MFA from Florida State, I divided my career between teaching undergraduate art and professional studio art. This double career choice kept me financially stable and allowed me to always pursue my artistic path and to take on parallel adventures such as motherhood. In my twenties I did a 6-month apprenticeship with the artist George Woodman and I was the recipient of an NEA Fellowship though the state of New Jersey.

As I am largely inspired by nature I moved to an isolated area of Northern Idaho in 2011, where I live on 22 acres of secluded Idaho Forest land. Being here allows me to intimately commune with nature and paint daily. I have become less interested in teaching and have surrendered to my persistent inner voice that says, “You are a Painter and you need to just paint.” Throughout all the days and the seasons of the year, I do just that.
What Art Critics have written.

A major part of Barrows-Young’s process lies in the art of observation. “Painting is a daily process of connecting intimately with the natural world that surrounds me,” she says. She uses sketches and photographs to record visual effects; such as patterns caused by light and form, or a captivating viewpoint, then assembles those, along with her memory of the moment, into images that marry a precise sense of composition to a spontaneous sense of movement. In some of her paintings, groups of powerful lines create currents of motion that carry the viewer’s eye along, while in others the intricate juxtaposition of blocks of color brings stained glass to mind.

Light is central to the effect of a Barrows-Young composition. “The woods and all of its constantly varying aspects of self are the light’s playful partners,” she says, and her ability to convincingly record the ways in which light can animate a scene makes viewing each of her paintings a dynamic experience. Nature, as she views it, is a work in progress: a place where many points of view combine, but also in which an interior spirit is found. The strength of her work lies in how she makes us aware of those points of view, while also vividly revealing the “being” she seeks to represent.

My work is about exploring the “being” of Earth as perceived through visual sensuality. In particular, the haunting, and illusive light in the Woods of my Northern Idaho home constantly captures my attention. Its temperament is impish, often filtering warmth through a distant stand of trees or running away down a path, tantalizing me, always seeming to be fleeing to a place just beyond reach. The woods and all of its constantly varying arrangements of irregular angled surfaces, textures and structure create multiple skylights through which the light can fall, bounce, reflect and absorb. Together the feral character of the woods and the angled northern light seems to cut every possible vignette into highly distinctive and multiple points of view, laying both side by side and simultaneously intertwined.

The New Jersey State Council on the Arts Fellowship – Exhibition 1986

2014 – To Present – Artist in Residence, Outskirts Center for The Arts, Hope ID