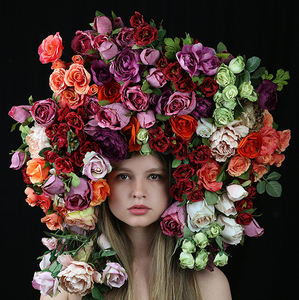 Diana Vurnbrand was born in Lima, Peru, in 1968. In 1986, she enrolled in the School of Communications at the University of Lima, and later transferred to the Hebrew University in Jerusalem, where she studied Art History in the Liberal Arts Department. She had the privilege of studying photography at the prestigious Betzalel Academy, and obtained her degree as a professional photographer at the New England School of Photography in Boston, in 1992.
In 1994, Diana set up her photography studio in Lima, and specialized in portrait photography. Starting in the year 2005, she ventured into artistic and decorative photography, and collaborated with the best known decorators in Lima. She also sold her work independently and through the Vértice Gallery.
Diana’s photographs were part of a collective exhibition at the Cecilia Gonzales Gallery in Lima in February of 2010. In August of the same year she participated in Lima Photo, and in September, her photographs were on display at Aninat Gallery in Santiago de Chile. In June of the same year, Diana had her first solo exhibition at Galería Junín 114, in Lima.
As an exhibitor of Vértice Gallery, Diana participated in the Lima Photo exhibit in 2011, and “Cámara Oculta” in 2014. Diana currently lives and works in North Miami Beach, Florida, with her husband, youngest daughter, and Lola the dog.