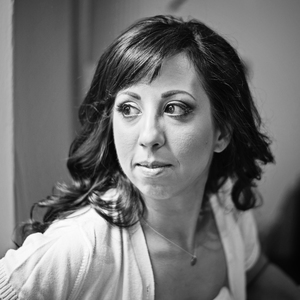 Maria Kalaoglou was born in 1980 in Athens, Greece. She grew up, playing in her grandmother’s atelier, always bursting of precious fabrics, laces and patterns. During her youth, she took piano lessons and mastered the French culture and civilisation, obtaining the Sorbonne II.

Soon, she was overtaken by Art and more precisely by painting. In 1997 she attended freehand drawing classes in Plakas Institute with the painter Sofia Alexiou. In 1999 she enrolled in the Mokume Institute and for the next 3 years she became initiated in the craftsmanship and the secrets of metalwork, precious stones as well as the creation of handmade jewellery.

Following the end of her studies, in 2002 she moved to London where she became accepted in the world-famous University Central Saint Martins, College of Art and Design. There she continued her studies on jewellery design next to recognized designers.

She graduated in 2005 with a First degree honours. Her final show collection was sponsored by Swarovski Crystal London and Opus 9, Leather Printing LTD.

Her work has been exhibited in Athens, London, Munich and Porto.

The summer of 2005, she returned in Athens where she continues creating studio jewellery.

When I was a naughty child, my grandmother used to call me names such as «ΓΑΙΔΟΥΡΑ» (gaidoura aka female donkey), «ΣΤΡΙΜΜΕΝΗ» (strimeni aka squiggly), and «ΑΝΑΠΟΔΗ» (anapodi aka perisher). It was her way to “compliment” me in an adverse manner for the deeds I had done… To this day these words have sealed the relationship we had and haunt my thoughts… In order to exorcise and neutralize their negative energy, I decided to turn them into badges of honor…