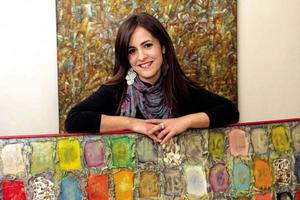 Inés Fagalde Busquets was born in San Miguel de Tucumán, Argentina. She got
her bachelor's degree in Plastic Arts and specialized in painting, being a disciple of Ezequiel
Linares at University National ofTucumán,
Inés’ art has been exhibited in many exhibitions in Tucumán and Buenos Aires, and has
participated in numerous local and national expositions.
In 2008, Inés travelled to Switzerland, where she taught art workshop at Mendrisino city
as well as Canton Ticino. Furthemore, she collaborated with Coqi, a clothing firm, in the design
of attire.
In 2011, she joined Noho Gallery, Chelsea, New York, where her art is exhibited. That
same year, Inés, alongside other artists, presented the ‘Be My Guest’ exhibition at Noho Gallery,
New York, and in 2012 the ‘Paint and fiber’ exhibition.
In August 2013 she was present at the ‘Who is Who’ exhibition, at Noho Gallery & M55
Art, New York. In September of this year she presented her own individual exhibition ‘Opened
doors’ at Noho & M55 Art, Chelsea, New York.
In 2014, Inés presented ‘North by Northwest’ at the Argentine Consulate in New York.
She was invited along with the photographer Veronica Garcia Valdez.
Her high relief characteristic art lead her to be invited to do four murals at the entrance
of the Sede de la Comunidad Beth Israel in Manhattan representing the city of Jerusalem.
Thanks to her success at Noho Gallery and other showings, Inés travelled to New York in
December 2015 and stayed until March 2016. During these months she did a series of paintings
and gave painting and drawing classes.
◈ Prizes ◈
Inés has been granted several prizes during her career, here are some of the most
noteworthy:
➢ 2nd prize at ‘Salon Poema Ilustrado’, 2000, Tucumán.
➢ 1st Honorable Mention at ‘Salón Poema Ilustrado’ 2002, Tucumán.
➢ 1st prize at the D.Ar.A (Diseñadores Argentinos Asociados) at Casa Dea, 2001.
➢ 2nd prize at the ‘Adquisición del Salón del Poema Ilustrado del Bicentenario’, Tucumán,
Argentina. In this piece of art she brought to life the poem “La Patria” of Magdalena
Paez de la Torre. Her painting is now part of the Artistic Patrimony of the Bella Artes
Timoteo Navarro Museum, Tucumán, Argentina.
◈ Art and beyond ◈
Inés has been in charge of the ‘Taller de Formación Artistica FORMARTE’, for the
company Citricola S.A., San Miguel de Tucumán, since 2006. As well, she is the responsible,
curator and organizer of the annual art competition ‘Pasion Artistica’ and the Annual Cultural
trip to Buenos Aires city of the above mentioned company.
Her paintings are part of private collections in Argentina, Chile, Mexico, Spain,
England and USA (Boston, Los Angeles and New York).