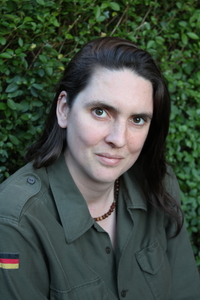 As a child, Lucy O’Donovan began drawing and using watercolours while holidaying in Pembrokeshire, Wales. She used to paint wildlife and landscapes and it was an avid passion of hers right into adulthood. It was then that she discovered oil paint with its rich colour and textures; she found it to be the perfect medium. The thick sculptural aspect of the paint allowed her to work in a three dimensional form which she found more expressive. It allowed her to build layers, a process through which, she said, “a much more visceral piece of work emerges.”
The shape, colour and quality of flesh are something that she constantly tries to attain. It is always a battle to manage the colour and texture of the oil, a balance of which she feels is never quite achieved. She thinks this is why her work has a tendency to vary – often experimenting with how to portray flesh in a way that works. She tends to paint the people who are involved in her life, as an emotional attachment often drives and influences the way that she works. She claims that painting is a fairly self-obsessed process: often painting in order to work through her own issues and those relating to the subject.
Her painting in the present day is driven by fascination with the human body and the feelings that this invokes. For her, it is important to portray the body in as honest a way as she can, irrespective of whether it would be considered classically beautiful or not. She is aware that the motivation behind this is probably a kick back against the social pressures of achieving the perfect figure. She believes this can be seen in her work both in technique and the emotion that it produces.
In 2008, she suffered a serious brain injury. She experienced coma, recovery in hospital and long term rehabilitation to bring her back to health. There was a long break from her painting which she found very difficult, as without her work she found it challenging and made her despondent. However after a long period of rehabilitation, she resumed her work which has brought relief and gratification. In some ways it appears to have altered her technique, although mostly her approach and subject matter is unchanged.
Lucy has enjoyed a wide range of art related disciplines. She has indulged in several workshops at the renowned Glasgow School of Art, Scotland, including Life Drawing and Figurative Painting. Recently she also completed a Woodcut Printing course at Trongate 103, Glasgow, and has been inspired to create a range of woodcut prints. O'Donovan also completed an Art Therapy workshop at the Department of Adult and Continuing Education, University of Glasgow in 2010.
In 2006 Lucy was approached by an Italian curator who exhibited her work in Sondrio and Acquasparta, Italy. After relocating to Melbourne, O'Donovan took part in “The Body Show 2007” exhibition at the Brunswick Street Gallery, Melbourne, Australia. On returning to her home town of Glasgow, Scotland in 2009, she exhibited her latest work at the “People and Places” show at The Big Mouth Café Company, Glasgow. From 2013 - 2015 she was represented by the Agora Gallery, New York, United States where she took part in several exhibitions, was published in their ARTSpectrum magazine and interviewed about her profession. Since then she was taken part in an exhibition at The Brick Lane Gallery, London and one of her works was selected to take part in Royal Scottish Academy Exhibition 2017.

These works show the people, the places, the feelings and the events that have taken place in my life at the time they were made

“Race for the prize - Flaming Lips”