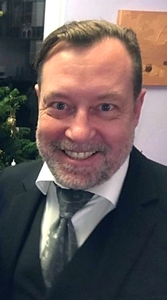 Jörg Galka-Teisseyre spent his childhood and youth in the German city of Paderborn, where he was born on 16 AUG 1962.
At the age of nineteen he moved to Le Mans, France, and later spent a year in London, UK, too. In 1990 he and his partner for many years then moved to Strasbourg, France, and later in 2005 back to Germany where he now lives in the southwest German city of Kehl on the Rhine.
Ever since 1989 he is employed with a major European airline. Working as a flight attendant was and still is substantially beneficial for his passion for collecting objects of all kind allowing him to nurture his sense for the Arts and Aesthetics.
Since his early years he is fascinated by decorating his as well as other people’s homes combining colours and special paintbrush techniques in a rather unusual and very personal way.
In 2013 he eventually combined his longterm decorating experience with contemporary abstract acrylic painting. In his artwork he widely uses various objects and material such as gems, sequins, wood, metal, glass, glitter, nail enamel, paper etc. which he brings back from his flight destinations inspiring him to create his unique artwork.
As one of the latest examples since 2015 are some of his paper works. Jörg Galka-Teisseyre uses various folding techniques – the more traditional Japanese style Origami fold as well as a much more contemporary and architectural way of paper folding. He uses both techniques to create either a stand-alone work of art or to integrate the folded object into his paintings.
Also in late 2015 he began using watercolours in his works, partially combined with other media to create some intriguing results.
ART WORKS | by JÖRG GALKA-TEISSEYRE exposed his work in the summer of 2016 in the German cities of Kehl am Rhein and Offenburg in a rather unusual setting – a hairdresser’s salon. Lately he exposed a choice of his art work at ART FAIR MÁLAGA 2017 held in June and July at the Palacio de Ferias y Congresos, Málaga, Spain.

Jörg GALKA-TEISSEYRE has just signed a three-month's contract of exposing some of his art work at ROSSOCINABRO GALLERY in Rome, Italy, starting in May 2018.

He was invited to hold a solo exhibition at ARTIFACT'S New York premices as well in the near future, once a sponsor will have been found to pay for most of the expenses.

The present website allows you to get a closer insight into the artists passion for colour, texture and volume, paper, glass and so on and the way he combines and transforms this material to become a very unique work of art.

In Memory of the Germanwings Airbus A320 suicidal crash in the French Alps March 24, 2015

In Memory of the Journalists of the French Magazine CHARLIE HEBDO killed in a Terrorist Attack in Paris, France, January 7, 2015

Acrylic | Bits And Pieces of a Broken Terracotta Buddha Head

We had the oysters for Christmas 2014 and I just kept the shells ...

The metal plate came from one of my broken gardening tools ...

The idea for this art work came on my on-duty flight to Hong Kong the first day of the Chinese New Year on January 29, 2017 ... and yes, I do know perfectly well that in this case it's the Year of the Rooster ... somehow I just love to provoke ...

'I see wonderful things' Howard Carter bursted out when he discovered Tut-Ankh-Amen's Tomb in the Valley of the Kings west of Waset/Thebes on NOV 29 , 1922.
The young King's funeral chamber - however - hasn't been opened officially until FEB 16, 1923.
The World was stunned when it discovered all these 'beautiful things' Howard Carter saw through the small opening carefully executed to get a glimpse of the tomb's inside before its official opening a couple of weeks later.
However, in a secret space behind the funeral chamber another treasure was hiding for more than 3,000 years, waiting to be discovered ...

'May your spirit live, may you spend millions of years, you, who love Thebes, sitting with your face to the north wind, your eyes beholding happiness.' (Inscription on a lotus chalice found by Carter among all the funerary objects accompanying the young king through eternity)

In Ancient Egypt the temple lake of Karnak near Waset/Thebes was considered as being holy. Priests purified their bodies inside its murky waters prior to doing their temple duties. The water was also being used during the holy rituals or for catering for the priests as well as the live stock living inside the temple.
It was build under the reign of Pharaoh Thutmosis III - his Horus name was Ka-nechet-chai-em-Waset/ Strong Taurus Who Appears In Thebes. His stepmother was Queen Hatchepset
who reigned over Egypt in place of Thutmosis III still being a child at his father's death.
New Empire - 18th Dynasty (around 1450 BC).