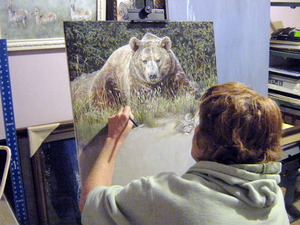 BIOGRAPHY Growing up in Oregon, I spent all of my rainy day time as a child and teenager drawing everything I saw. Although primarily self-taught, I studied the effects of light on color extensively.

In the 1980s and 1990s I produced a large volume of work, showing at such places as Ellensburg, WA and Portland, Or. I have work hanging in many private and corporate collections. As a single parent, I took a hiatus from my art career until my move to the east coast in 2005. While there, I received numerous awards and recognitions for my work, including 4 Best in Show and 2 People’s Choice awards at juried shows sponsored by the Cape Cod Art Association, a special memorial award at the Salmagundi Club in New York City, and Best Oil at the Cheyenne Frontier Days 2009 Western Spirit Art Show. In addition, one of my drawings was selected to be among the finalists in the Art Renewal Center’s International 2009/2010 Salan, a world recognized competition intended to showcase realistic art. Currently, some of my wildlife art is to be featured in a coffee table type book titled Wildlife Art Today, that is due to be released in the fall of 2013. It will be available world wide in such venues as Barnes & Noble, Target, Amazon.com, and Walmart.

Since moving here in 2009, I have been attempting to capture some of the personalities and beauty of the life in Montana, and am continuing to learn and grow with each new work of art that I create.

Some oil paintings I have done from 2000 to today

“The Miracle of Life”