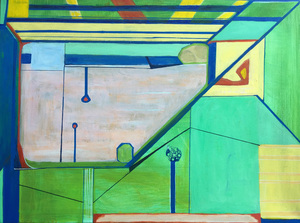 Born in Syria, Bushra Shamma lived in a number of countries, including Kuwait and England before relocating to New York, then to Virginia. Bushra has a B.Sc in Computing and Statistics from London, England; a Masters in Management from M.I.T.; and a Masters in Education from Harvard. She worked in Banking, I.T. and in Education.
Bushra’s work benefits from her multi-cultural background and experiences. Her multi-varied forms and her choice of colors re-interpret her emotional reactions to her personal history.
In the year 2000, while still working full-time, she embarked on a new journey, taking art classes at The Art Student League and at the National Academy of Design School in New York as well as attending workshops at Hudson River Valley. Then in 2004-2005, taking a sabbatical, she spent 9 months at three different artist residencies, in Spain, in India and the last one in Cyprus where she taught a Figure Drawing class at an art school and had a solo show at a gallery in Limassol.
In New York, Bushra’s work has been exhibited often in group shows as well as in a few solo shows. After moving to Northern Virginia in 2008, Bushra continued to study at various venues including the Smithsonian, the Corcoran and the Art League School. Her work has been exhibited in juried shows at various venues, such as, The Art League in Alexandria, Alexandria City Hall, Falls Church Arts in Virginia, and most recently at the Phoenix gallery and East End Arts gallery in NY. Some of her work has received First Place or Honorable Mention awards.