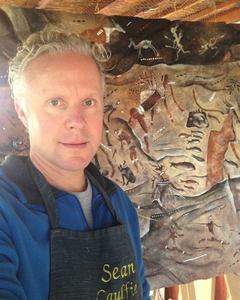 Sean Caulfield was born in England in 1969 and immigrated to South Africa with his parents at the age of two. He showed a keen interest in art from an early age and excelled at high school where he painted landscapes, seascapes, portraits and abstracts in oils and acrylics. Upon matriculating at Sea Point Boys High School he received an award for excellence in art.

His passion for being creative and talent was recognized and encouraged by the late Christian Prosser, who later became his mentor. Mr. Prosser offered to teach Sean everything he knew, refusing payment for his tuition. For the last three years of his life he guided Sean through all the finer techniques of painting. He became a great inspiration to Sean, who still holds a deep respect and appreciation for his expert guidance.

Sean came up with the idea of painting on a manufactured rock surface whilst working for Duncan Temple-Forbes, his Godfather, where he learnt how to make rock water features. By compressing actual rock aggregate (stone granules) into resin and then casting it into a mould taken directly from the living rock of the local mountains he creates the special moulded rock canvases for his unique works of art.

Within his technique Sean has developed over the years he has captured the delicate shapes, textures and colours of original ancient San rock art by using oxides, oils and solvents to replicate the faded rustic appearance of their ancient art form. He is passionate about his work and hopes to preserve the San's cultural history through his paintings.

Sean has made and extensive study of bushmen paintings in their natural state throughout the mountainous regions of Southern Africa. He has also researched the Bushmen or San culture through literature and has met and interacted with the Bushmen people themselves on numerous occasions.

This immersion in culture as well as the art has given Sean the confidence and the inspiration to faithfully reproduce many of the original Bushmen paintings in addition to his own stylized works in this medium.

In Sean's art on his rock canvas he also draws inspiration from Africa and its diversity, painting semi abstract sometimes mystical wildlife scenes and does portraiture of the African tribal peoples fused with Africa and its art, leaving the rock backdrop to give it that African feel.

Sean has undertaken numerous commissions, including a portrait of Nelson Mandela, which was presented to the president in 1997 to commemorate the "Freedom of the city of Cape Town".

Using his unique rock moulding technique, he has also undertaken " cave building " and has coordinated the design and construction of a 300 square meter cave inside "Museum Africa" - Johannesburg, as well as a 100 square meter imitation of the Cango Caves, in Oudtshoorn.

Sean has exhibited his art extensively in South Africa since 1990, and internationally in the U.S.A, Australia, Switzerland, Germany and United Kingdom. He is a gallery owner in Cape Town's Waterfront since 1996 and this is where he exhibits his rock art and you might be lucky to catch him demonstrating his techniques.

Sean has been offering visitors to the Cape an opportunity to own and enjoy a unique piece of Africa for more than ten years. He now wishes to extend that opportunity to customers as well as dealers throughout the world.

Sean has always been passionate about his art and in 1990 he saw the potential of painting on moulded rock as a canvas. In giving birth to his idea he took different colour stone aggregates(sands) and mixed it with resin compressing it into a mould taken from the living rock surfaces in nature, thus making it look and feel extremely realistic. One's first impression is that it is a real piece of rock which may appear heavy but after closer examination you soon realise that it is very light-weight and strong as it is backed by fibre glass. His mediums are oxides and oils, in his painting style he draws his main inspiration from the ancient Rock Art of Southern Africa.

In addition to him painting in the traditional style of the ancient San Bushmen peoples (also known as the Khoisan) he presents a series of wildlife paintings and abstracts.

Sean has recently introduced other rock art styles from around the world as a source of inspiration and this has included Mayan art. His depictions of Mayan art started because of his interest in the Mayan calendar. Having travelled to Guatemala to view the ancient temples, inscriptions and art, was a great inspiration.

Sean demonstrates his painting technique at his "Rock Art Gallery" in the Watershed at the V&A Waterfront, Cape Town. His work offers a unique opportunity to own and enjoy a tribute to these astonishing ancient cultures, which modern man cannot afford to forget.

Paintings on a Moulded Rock Meduim

Paintings on moulded rock as a canvas. In giving birth to his idea he took different colour stone aggregates(sands) and mixed it with resin compressing it into a mould taken from the living rock surfaces in nature, thus making it look and feel extremely realistic. One's first impression is that it is a real piece of rock which may appear heavy but after closer examination you soon realise that it is very light-weight and strong as it is backed by fibre glass. His mediums are oxides and oils, in his painting style he draws his main inspiration from the ancient Rock Art of Southern Africa. In addition to him painting in the traditional style of the ancient San Bushmen peoples (also known as the Khoisan) he presents a series of wildlife paintings and abstracts.

Qwanciqutshaa, the chief, used to live alone. He had no wife, for the women would not have him. A man sent a number of little boys to get sticks for the women to dig ants’ eggs. One of the women grumbled, saying the stick she received was crooked and those of the others were straight.
That night she dreamt that a baboon came to take for his wife a young girl who had refused Qwanciqutshaa. Next day, as she was digging alone, the baboon came to her in a rage (it had been present and heard her observation about the stick, and thought she was mocking at the crookedness of its tail), and it said, “Why did you curse me?”
And it threw stones at her, and she ran home and told the girl of her dream and that it was coming true, and told her to escape to Qwanciqutshaa. The girl sunk into the ground, and came up at another place, and sunk again. She sank three times and then came up and went to Qwanciqutshaa’s place.
Qwanciqutshaa had killed a red rhebok and was skinning it when he saw his elands running about, and wondered what had startled them. He left the meat and took the skin and went home, and found the young girl there, and asked why she came. She said she was frightened of the baboon. He told her to...

QWANCIQUTSHAA - The rising subconscious memory of time.
ANCIENT CAVE ROCK ART PAINTINGS MADE SENSE OF THROUGH THE MYTHICAL STORIES OF THE SAN, told by Qing in 1873.
The San Bushmen Creation Stories.... a narrative explanation.

Chaminuka is the Great God of the Shona peoples of Zimbabwe

Replica of painting on rock cave walls by the San peoples. Ancient Mythological Creation stories of the multidimensional world of the San Bushmen of the Drakensberg(Dragons mountain), a simple yet deeply spiritual awareness of life. Our ancient imagination dreamed a memory of the future we have become. From this ancient memory, alive in the San Rock Art paintings, a primordial LIGHT shines in our modern world today, sacredly bridging the polarities of the TIME WAVES of Creation. Acknowledging the rising subconscious Cosmic fields, calling back the lost SOUL and honouring the memory of ancient San mythological inspiration and their Rock Art paintings, inspired to reflect their Creation Stories.

“LEOPARD OF THE NIGHT”

The leopard is the stalker in the night

A replica depiction of the Whitelady of the Brandberg in Namibia