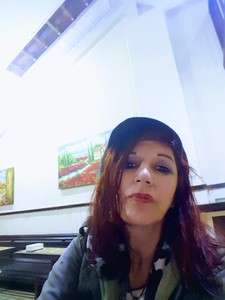 Loredana Bruno De Melo is a painter attached at the figurative oil painting since her opening of fifteen years ago. Born in the urbanized province of Milan, she had soon the desire to live in quiet places so moved to the umbrian countryside. At the beginning her only deep passion was music but by thw time she found out that also painting gave her the possibility to show out her anger and her criticism against a world built on a male vision, where women  are satellites that go around the infinity no-sense. All of her painting, have as a common thread the intolerance of women in acceptance of roles,which the painter wants to overcome or destroy. Many women of her canvas,infact, are inspired to mythological stories from which the artist loves to get ideas and to quench her thirst. Loredana Bruno De Melo has partecipated to a lot of art expositions in the region of residence like in Perugia ( Rocca Paolina), Terni, Città della Pieve, Monteleone( PAF), Montegabbione, Ficulle and Orvieto ; and also around Italy like in Venezia (Biennale), Udine, Firenze,Roma,  Bologna, Padova,  Torino, castello di Capalbio, San Casciano dei Bagni (SI), Sesto San Giovanni (Milano). Her works are available online too, on premioceleste.it, talentart.it or on the facebook page "Loredana Bruno de Melo".