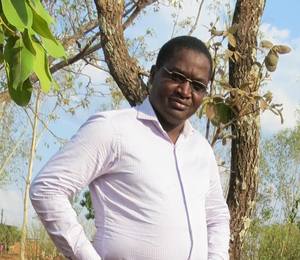 Ellis’s full name is Ellis Tayamika Singano born on 18 january 1980. He uses Ellis Singano as his artist name following his father, himself a well-known artist who passed away in 1998.
“I started [doing] art when I was about 13 years old,” Ellis says. “My father used to chase me when he saw me doing it, [although] I did not want to become an artist I was [just] doing it for fun. I was dreaming of becoming a scientist.”

When Ellis was 18, his father passed away. “When my father was at the hospital I finished some [of his] paintings that were unfinished,” he explains. “Soon after his death a lot of his customers asked me if any of his children knew the art; I jumped into it and started delivering to them.”

His dreams of becoming a scientist were buried after positive feedback from customers who saw continuation of his father’s style in Ellis’s art.

“Having seen a lot of people appreciating my art, and that they saw no difference with that of my father [sic], that gave me power,” Ellis says. “I started reading about great artists like Pablo Picasso, Claude Monet and Henri Matisse – they inspired me more with their great pieces of art.”

In 2000 Ellis began making batik art and developing his own style, though in his father’s spirit. That same year he sold all three paintings he produced; since then he has done more than 30 exhibitions.

the democracy in Africa is been translated in many ways.