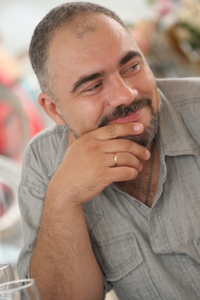 Vitaly Maximenko
Vitaly was born in 1976 in Moscow. Already in school he began to show love for drawing, sketches filling the free space of the training notebooks. His childhood and youth were held in conditions of political and economic reforms in the country, which affected the welfare Vitaly's family (parents worked in the defense industry) and the impossibility of learning the profession of artist. Despite desire to be engaged in creativity, he, after leaving school, enters the Institute of Law. After graduation Vitaly worked in law enforcement agencies, and then a lawyer at various enterprises. All this time, he did not abandon his passion, painting the during lectures and classes at the institute, as well as meetings and talks at work, notebooks, diaries and notebooks with small drawings on different topics. The ability to draw Vitaly allowed to develop their own company logos, in which he worked as the head, as well as promotional products and design shops.
In 2014 he began to take private lessons in painting and drawing at the private school-studio "Talent". Animalistics, a landscape and a still life became its main genres. The style of work of Vitaly considers himself to classical realism. It gives the greatest priority to graphics.
Vitaly participates in various Russian and international competitions and exhibitions. Its works are stored in private collections in Russia and in the Museum of M. Bulgakov (Moscow).
Exhibitions:
2015 - Studio "Talent", a group exhibition (Moscow, Russia)
2016 - Museum of Mikhail Bulgakov, a group exhibition "Bulgakov in illustrations"
(Moscow, Russia)
2016 - Studio "Talent", solo exhibition (Moscow, Russia)
2016 - Fomenar Prize, group exhibition (Интернет, https://fomenar.eu/arte/work/paintings)
2016 - Colors of Humanity Art Gallery, group exhibition "Blue 2016 Show"
(http://www.colorsofhumanityartgallery.com)
2017 - Primo Piano LivinGallery group exhibition "Visionary Art Show" (Lecce, Italy)
2017 - Creative union of professional artists, group exhibition "Talk to me in one language"
(Moscow, Russia)
2017 - Creative union of professional artists, group exhibition "Artist and word"
(Moscow, Russia)
2017 - Primo Piano LivinGallery group exhibition "Timeless Fragments" (Brindisi, Italy)
2017 - Creative union of professional artists, group exhibition "Secret tracks of winter"
(Moscow, Russia)

Vitaly is married, has a son and a daughter.

Big white shark in blue ocean.
The artwork is framed

The plot is based on Ivan Ayvazovsky's pictures.
The artwork is framed