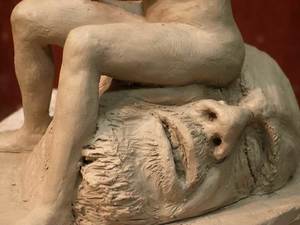 I was a loner as a kid, an only child, the kind that grow up to be terrorists, bank robbers or artists. I wasn't interested in terror but tried robbery, stole a watch in the third grade but got caught and took up art. They haven't caught me at that yet.
--Warren Criswell

Warren Criswell was born in West Palm Beach, Florida in 1936 and has lived in Arkansas since his bus broke down there in 1978. Primarily a self-taught painter, Criswell is also a printmaker, sculptor and animator. He has had 41 solo exhibitions in the United States and one in Taiwan. His work has been included in 72 group exhibitions in New York, Atlanta, Washington DC, Arkansas, Virginia, North Carolina, Germany and Taiwan, and is represented in the permanent collections of many institutions, including: The Arkansas Arts Center; the McKissick Museum of the University of South Carolina; The Morris Museum of Art, Augusta, GA; Historic Arkansas Museum, Little Rock, AR; the University of Arkansas at Little Rock; Capital Arts Center, Taipei, China; the University of Central Arkansas; Hendrix College; the Center for Arts & Science of SE Arkansas; and the Central Arkansas Library System, as well as in private and corporate collections in the United States, Europe and Asia.

I use the materials and styles of the Old Masters to express images and ideas of the present, or timeless archetypes and myths set in our present day environments. But I have no formula or rules. Each of my paintings is a discovery, each with its own formula and rules. I never know what's coming next, I only hope it's something. The worst thing that can happen to a painter is to learn to paint. I approach each painting with fear and trembling, pretending it's my first and hoping it's not my last.

“Fly Me to the Moon”

“Götterdämmerung (or The End)”

“As the Crow Flies”

“A Man Following a Woman in Dark Woods”

When I returned to representational art in the late '70s, watercolor was my first love - probably because it was so different in technique from the abstract oils I had done back in Florida eight years earlier. I became a transparent watercolor purist, working from light to dark, no opaque paint, ever. I used masking fluid in all kinds devious ways to achieve intricate highlights I couldn't get by painting around them. I got over the purism eventually, and sumi dishes from Japan became my preferred watercolors. Some of the lighter colors are more translucent than transparent and can be almost opaque if dry-brushed, allowing me to use them on black paper a few times - something unheard of the watercolor world! But mostly I use white paper for light, and I still use the masking fluid when necessary. I try to get the same high contrast, dramatic chiaroscuro effects in my watercolors as in my oil paintings.

“Fly Me to the Moon”