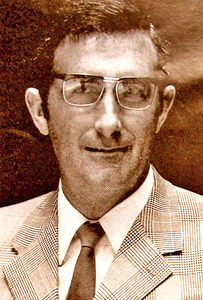 From an early age displayed a vocation and a capacity for painting but although he found himself studying Law, he nevertheless found time to study drawing and painting at the School of Arts and Crafts of San Salvador where he had as teachers such gifted painters as BORBOLLA and TAMAYO.

After finishing Law and despite the promising prospects of a cosy life in the world of Banking, he decided to travel to London where his works were exhibited at the Victoria Embankment and at the Leighton House Art Gallery. From there his artistic restlessness took him to France, Belgium, Holland, Germany, Austria, Italy, Greece and Egypt.

In 1962 he came back to Spain to have his first exhibition in the Ateneo Jovellanos, Gijn. Daniel Arbes wrote of the young Roces: 'to travel from Gijn to the Valley of the Egyptian Kings in search of inspiration is certainly something out of the ordinary.'

He returned to England an exhibit at the West Malvern Vicarage. He designs and executes the set for 'El Burlador de Sevilla' performed at Cumberland Hall. In the meantime, while preparing a doctorate in Maritime Law he does a Master in Arts at University College London.

The biography of Carlos Roces, written by D. Patricio Adriz, figures in the 'Gran Enciclopedia Asturiana' and in the 'Diccionario de pintores espaoles del siglo XX.' His work hangs in museums and private collections in the Argentine, Ceylon, Colombia, Egypt, U.S.A., England, Mexico, Paquistan, Venezuela, etc., as well, of course, in Spain.

In 1978, LINARES-RIVAS wrote these lines in a Leon newspaper.:-'Since 1948, when very young, to the present day, Carlos Roces has had an intense curriculum vitae, so many steps on the path of progress that it is difficult to pause for a moment: collective exhibitions, individual exhibitions, awards, prizes, academic titles, in short, many milestone in a still short lifetime.'
In 1996, . He was the sole Asturian representative at ARTESANTANDER for the Toison Gallery. He held an exhibition of his work in the gallery Sala de Arte BBV, Oviedo, being introduced by J.A. Samaniego, and in Santa Engracia Gallery in Madrid where Mauro Muniz did the honours.
Following up on exhibitions in Gijn, Oviedo and Bilbao, he now exhibits in Manila forming part of the 1998 Centenary Program in the Philippines.

To the return of the Philippines, it exposes along with in the room of art Monticelli de Gijn Piole, Martinez Abbots, Menndez Pidal, Alvarez Room, etc., from the 18 of December from 1998 to the 8 of January of 1999. The 25 of February of 1999, in the Sala Hator of art, present/display the exhibition "From Manila to Gijon". The 6 of May of 1999, expose again in the room of Dingraph , of Oviedo, simultaneously that presents/displays its book "The Felgueroso Brothers and the Asturian mining", in the School of Engineers of Mines. Day 3 of September inaugurates, in the monastery of Valdedis, Villaviciosa de Asturias, religious a painting exhibition, presided over by the advisor of Education and Culture of the Principality, Javier Fernandez Vallina

In September 1998, was oppening an exhibition of pictures in the Instituto Cervantes, in Manila , Philipines.
It was opened by the Spanish Embasador Delfin Colome Pujol and the Philipine Secretary of Culture, Alejandro "Anding" Roces.

“People in the Clib”

Selfportrate 1960. In the mirrror . It was made in Gijón after the painter return from England.

Antroxu means Carneval. The pinture was made in the Marques Place, in Gijón, Spain

Gospel. Mary, Josef and the Child.... going to Egipt-