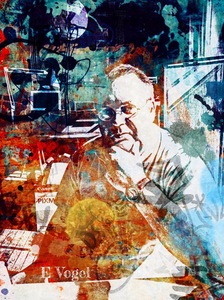 Born in 1968 in the historic city of Harfeur in Normandy, Éric Vogel, since he his youth, has been attracted by art. At first, he was Pierre Lambert’s pupil, - Officer Art-Science and Letters, who initiated him to painting. Sometimes later, from 1986 to 1987, in parallel with its cabinet maker training, he attended evening classes at the Beaux-Arts. In 1989 and 1990, after its cabinet maker training at the École supérieure d’ébénisterie in Avignon he graduated and this allowed him to work in the Schmitz workshop in order to restore during two years antique furniture, mainly coming from the eighteenth and nineteenth century.
Back to the École Supérieure d'Avignon, he followed a specialized training in carving and gilding on wood and stone in which he graduated. During his two years of training in order to be graduated, he created a desk of Art-Nouveau inspiration and also a griffin in golden wood.

From 2000 to 2010, Éric Vogel, art craftsman, worked as a restorer of works of art in furniture and sculpture in his Harleur workshop.
But as painting was missing him, he started to paint again in the 2000’s.
His style is lyrical abstraction with sometimes a figurative mixture.

His passion for computers led him to create original digital works sometimes coming from his own works with mixed technics. His sources of inspiration are diverse, but the elements of Nature such as water, earth, fire, light, chiaroscuro, tone contrasts but also humanity are particularly dear to his heart.