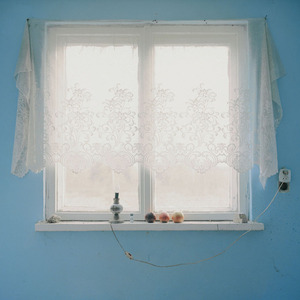 Ula Wiznerowicz, 3rd Prize Winner of FotoVisura Grant, March 2012. Following her graduation from a BA course in Photography at Middlesex University in 2010, she was awarded a prestigious prize at the D&AD New Blood 2010 exhibition showcasing selected work from UK graduates. Shortly after, she was chosen as one of the four finalists for the Channel 4 and Saatchi Gallery New Sensations 2010 Prize. A short documentary film about each of the selected artists was made and aired by Channel 4. Ula’s work received international acknowledgement, with the series Behind the Curtain having been exhibited at in Italy and Poland and her photography has already benefitted those battling alcoholism. In March 2011, she donated a two-metre long artwork from the series to a charity auction organised in support of the London-based Seventy4 Foundation that deals with alcohol addiction.

Forgotten and useless things covered in dust; emaciated cats running around searching for leftovers; rooms taken over by spider webs and a strong odour of alcohol. This was merely a part of the chaos that she encountered while photographing her native village Palmowo and the surrounding areas. The series of photographs represents a personal journey through the individual stories of the men and women dealing with alcoholism. She has attempted to create a visual narrative to reflect on her own story of the past. All the characters are not necessarily alcoholics, but everyone has been affected by alcoholism, through family or friendship.