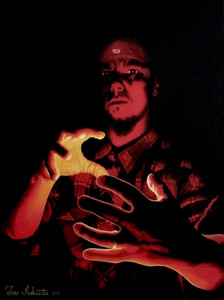 Tero Isokääntä was born in Kalajoki a small city in Finland in 1982. Teros mother is an artist too so they have joked that he started painting in her stomach when she was pregnant. Tero was doodling with pens before he could even walk. Tero made his first oil painting when he was four years old. He has been drawing whole life but started to paint when he was 16 and since then he´s on that road. Almost ten years Tero painted with oil colors but then he wanted to work more and paint quicker. So he found acrylics and painted with those over ten years learning new tricks. After that Tero went back to painting with oils.

From 2000-2003 Tero Isokääntä studied Glass art, so his profession is Art glass artisan. When he was learning glass art he did a lot of reading about Native Americans, worlds different religions, spiritual knowledge and philosophy. So that´s why in Teros art there are some kind of mystique presence. Absence of art glass equipment Tero continued to paint and fused the learning to paintings.

In Finland if you´re male you have to go to army (minimum 6 months) or do civil service which is non-military service (13 months). Tero Isokääntä is a pacifist and war resister so he refused all that and was sentenced to prison to six months. In 2006 Tero found himself as a political prisoner.  Tero is a peaceful fellow, so he did get along with everybody and didn’t have any problems. That experience still riches his life and his art because the different life views and life stories he learned over there.  Because of that experience Tero thinks more what he wants to say to people with his art and what kind of energy he wants to create in to this world.

In 2016 Tero won his first art competition, The 2016 American Art Awards-category: Acrylic-Human Figure. He also came 4th in category Realism-Human and 5th in category Portrait of someone famous.

2017 Teros two paintings were in three different multicultural group shows in Italy, two in Firenze and one in Milan.

5th place in The 2016 American Art Awards, category Portrait of someone famous.

“a New day has arrived”

“Circus of the subconscious”

“Dancers in the morning sky”