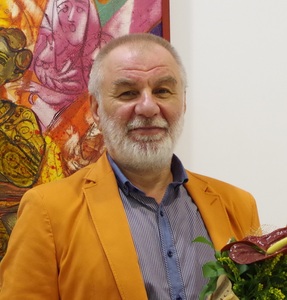 “The beams of the sunrise caress the shapes and slowly reveals their beauty and new colours. In my childhood this fountain scattering colorful drops flooded the forest, the fields, the houses and the people I saw.
This fountain still continues to colour my every encounter with nature. I am a spectator and a participant in a process in which the beauty of this world creates new images that give wings to inspiration.
The painting is an attempt to preserve the transient beauty of life and an opportunity to start a new friendship. The movement of the brush gives birth to a fairy-tale world and this magic is fascinating. It surprises me every time, it charges me with curiosity and shows me unknown lands.
Paintings allow us, whenever we wish, to enter into their world of reflections and feelings, full of the vitality and eternal youth of the emotion. I am happy to be close to the world inspired by the colourful lights of my childhood dream. I am happy I can draw it and share it with friends; I can show my paintings and sculptures and start a dialogue.” Rumen Petkov

All of the paintings are created with acrylic and oil on canvases.

It was love from first sight. The two fish fell so deeply in love that they started looking human and even grew noses. But there was an unexpected obstacle – the noses bumped into each other when the two fish wanted to kiss. Fish don’t have necks so the two fish didn’t know how to avoid this inconvenience. They felt different and isolated themselves from the rest of the sea inhabitants. They built an aquarium just for themselves. The walls of this aquarium turned into a magnifying glass, which made their love look even greater.

“TOWN IN THE SEA”

Тhe houses stood on top of the cliffs observing the sea. The big waves were constantly destroying the narrow footpaths and stairs reaching down from the steep slope. Perhaps they were angry at their destiny – forever crawling at the feet of the town. But from up there, somewhere in the middle of the land, the views were different. It looked like the sea had taken the houses, the streets, the trees and the people on its waves and was carrying them to a distant and unknown shore.

The gate had been closed for many years. Its frame was twisted from waiting for the carts full of hay to come through it again. The poles of its foundation were sticking out of the top like rusty bones. Beside it, an old cart was waiting for its black horse. Its rheumatic wheels could barely hold it straight, so it was leaning against the wall. Nevertheless, some happy lights, perhaps the sparks of common memories, were pouring over the gate and the cart. This held them together for a long time, even though they were missing each other their whole life.

The town was small and tucked inside the mountain. Every house wanted to be on the sunny street. The rooftops were pressing against one another and sometimes pushing the neighbor's windows. This created a lot of problems because the windows were outward opening. There were grills on the inside so the neighbor's roofing tiles wouldn't spill inside the room. These measures, the good organization and the mutual respect filled the street with happiness. The houses looked very happy and their colors made the street bright. People liked this street.

The angle from which he was looking at the new one seemed bad. They probably wouldn't understand each other from first sight. There was little hope that this would happen from the second or third look. Maybe producing different sounds would do the job, but the other male ravens wouldn't like that. They were all fools and never knew anything about good singing. They would come right in front and start flapping their wings and squawking. Would his and her eyes ever meet again?

They had given her the canary when she was six years old. She looked after it for many years and was very happy. Judging from its songs, the small bird was also very happy. The affection was mutual and they were showing it by singing in a duet. This surprised and impressed everybody. People loved them and accepted them and kept all doors open for them because happiness is a welcome guest. Suddenly the girl was sixteen.