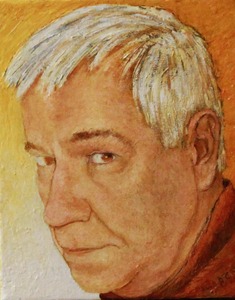 PAUL SIERRA BIOGRAPHY. From the MCA catalog “Art in Chicago 1945-1995”.
Paul Sierra was born in Havana, Cuba in 1944. Growing up in Cuba, he wanted to be a filmmaker. After immigrating to the United States as a teenager however, painting became a more feasible ambition, and it led him to enroll at the School of the Art Institute of Chicago. His lushly colored canvases often depict symbolic landscapes, self-portraits or interiors. His themes include Greek Mythology, the exploration of man’s most discordant psychological states and the artist’s personal journey through life. Sierra has had more than sixty solo shows to his credit in the last twelve years. His works have been acquired as part of numerous significant public art collections, including, among others, the Smithsonian Museum of American Art, the Chicago Museum of Contemporary Art and The Snite Museum of Art.
WEB SITE: paulsierra.com

All works are oil on canvas.