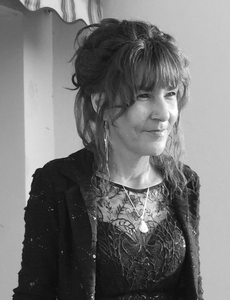 Nina or Nadine Pillet was born on the first days of 1970 in Sierre, Switzerland. After formative education, Nina decided to explore SE Asia and discovered a traditional artistic niche of applying carbon powder to parchment. Studying under a local master, she became both a practitioner and an exponent of old techniques which she translates visually from one culture to another and back again.
On her return many years later to Switzerland, Nina continued to explore portraiture techniques but her involvement in teaching alternative medicine incurred a temporary hiatus in her artistic disciplines. In her medical work she became the author of several publications and books.

When she returned again to Asia in 2014, she immediately re immersed herself in artistic discovery. She remained for several months as artist-in-residence in a local gallery. Here she finally found appeasement and flourished in producing a new series of images which she continues to add to consistently.

She now divides her time between both continents.

“My paintings are entirely based on human emotions which have always fascinated me. Mostly portraits, communicating feelings captured in their daily evolution with symbolism of human sentiment as inner peace or the search for harmony and love. The images are created with carbon powder, sometimes with a base according to the needs of the specific subject. Using fine paintbrushes, I apply the powder in very small quantities which allows me to create different tones, textures and moods throughout the entire spectrum of light. The result is similar to black and white photography with added human sensuousness. In some of my paintings I use pastel powder which I apply the same way to put into contrast a specific detail, e.g. eyes, a jewel or a scarf. I sometimes use watercolour and/or acrylic paint to create a background before applying carbon. This can create the impression of an old painting contributing to my chosen theme. This subtle technique is virtually unknown in Occidental countries and generates most curiosity.

In the actualization of a painting, most important for me are the emotions I create which, in turn, resonate with the observer’s personal spirit and therefore finds itself connected to the image. Achieving ‘life within’ is my ultimate aim."

This particular technique is very demanding in time and patience. A
carbon portrait measuring 28x38 cm takes an average of 20 to 30 hours to finish and a bigger format around 40x60 will take between 40 and 70 hours in relation with the details. During mixed techniques she easily reach 100 hours of work. Each painting is a journey through deep emotions, the magic of creation out of space and time. She hopes it will transport you like it transports her.

In the actualization of a painting, most important for me are the emotions I create which, in turn, resonate with the observer’s personal spirit and therefore finds itself connected to the image. Achieving ‘life within’ is my ultimate aim.

The artworks in this portolio were inspired by photos from the web, my private collection or my imagination.

The artwork "The Madness" is an interpretation of a photo made by Daniel Thibault, with his kind permission.

I whish you a nice travel into "Emotions"

“Little girl of the mountains”

“Little girl of a tribe”

“The child behind the curtains”

“On the other side of the veil”

“From chrysalis to butterfly”