Zyngiel Krzysztof > Known As The "animus". 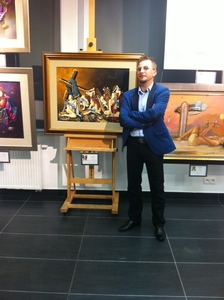 BIOGRAPHY
In 2009 Krzysztof Żyngiel was considered to be one of the 13 most popular and accomplished Polish painters of the young generation.

Krzysztof Żyngiel known as the "ANIMUS" is an artist painter of Polish and Lithuanian origin.

In 2010 he was officially recognized as a prominent artist among the world’s most accomplished painters.

He was the first-place winner in the Polish competitions “Architecture of My City” and “A Landscape of Poland – Tradition, Present and Future”; several times he was awarded first prize in various art contests, for example: “Do Not Smoke”, “Landscapes of Jura”, “Earth Day”; he also won honorable mention in the Earth Day celebration event.

He graduated from Jan Długosz Academy in Częstochowa in the academic year 2006 with a "Degree of Master of Fine Arts in Painting" after he defended his MA thesis receiving a “very good” grade and a Degree Certificate (Graduation Diploma) with honorable mentions.

Krzysztof Żyngiel is a member of the „ASSOCIATION OF POLISH ARTISTS AND DESIGNERS = ZWIĄZEK POLSKICH ARTYSTÓW PLASTYKÓW - ZPPA“.

ZPPA is a member of the International Association of Art ( based on the founder dokument > IAA / AIAP - UNESCO, Paris 1956r.< ).

Krzysztof Żyngiel about him self…
“Abandon all your beliefs, Leave the world you have lived in so far behind this door, You are entering a world of magic you have only ever dreamt of…”
Visionary “Apocalyptic cities” often take a form of anthropomorphic bodies that are neither bulky nor clumsy, they become slender, but do not lose their rigidity. The monumental megalopolis in which I depict figures, their hands and faces amalgamated with architecture may be called a painted melic poem. By using rich symbolism, thoughts and Latin sentences complementing the narrative, I am able to express myself and share my visions with the audience. I often paint cities that have various architectural solutions. I combine buildings with defensive walls (to protect us against evil), city gates (hiding some secrets); I present old residential houses. Most of the time they are lifeless and departed. Defensive areas, palaces, manors and sacral buildings that used to witness glamour and allure, now are asleep and buried.
Burning sulfur and fire that rained out of heaven on Sodom and Gomorrah can be compared to today’s fires, fights and wars all over the globe. Bombing, terrorist attacks, deadly acts of terror, missiles and explosives hurting people like swarms of bees – we are constantly being destroyed by the aggression. I am upset and threatened by a vision of the cities that I get in my head like a snapshot from a camera. It is hard to remove this view from my mind. When I see the scenes of death and extermination which I illustrate using lively or monochromatic colors, I am horrified. I know it’s a gift I have to live with. We must remember that wherever there is evil, there you will also find the good. Therefore, there is hope, a prayer and a pursuit of a better tomorrow. The good can always be uncovered, yet it requires deeper understanding and insight into one’s own mind and soul.

Zyngiel Krzysztof > known as the "ANIMUS". hasn't uploaded any images yet. Please check back soon!