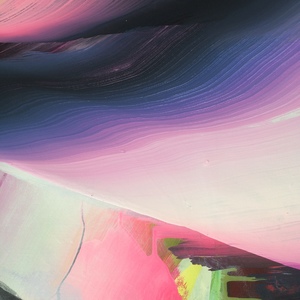 Juan Esteban Usubillaga also Known as Onecho was born in Caracas, and grew up in various regions of Venezuela.
He began studying visual arts at the young age of 12 when he dropped out of his conventional school to attend a private art school. Juan Esteban went on to get his fine art degree at the well recognized University of Venezuela, “la ULA”. His first exhibition, A Separate Reality, was the first of it’s kind to receive sponsorship from the National Committee of Art and Culture in Venezuela (CONAC). A year later in 2004, his senior thesis project, "escalada creativa” also earned full sponsorship from the French alliance of Venezuela in Merida, Venezuela. Since then, he has moved to the United States, married, and painted two more impressive series while partnering to raise his eleven-year old son.
His works have been shown in prestigious locations such as: the Boettcher Concert Hall in Denver, Colorado,
Rose medical center in Denver, Colorado, solo show at Artworknetwork in Santa Fe, Denver. And exhibited at Madelife, Boulder, Colorado.