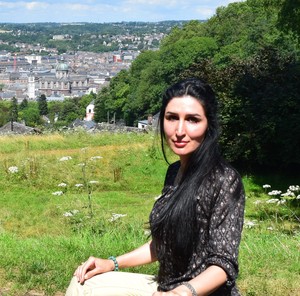 Master of Art in philosophy
Bachelor of Science in Physics
Following the questions that occupied my mind, I studied bachelor of physics. I enjoyed studying the rules that govern the universe. Gradually, after BSc graduation, mankind's reasoning power, which is means to know outer world, attracted my attention, so I decided to study philosophy in MA course. Philosophical topics were attractive for me because they discuss about fundamental topics. Meanwhile, I used to study about culture and art and its effect on the public and I tended to display my ideas as an artwork more than philosophical disscution so I decided to learn art.
I started art by calligraphy.In my calligraphies , not only I attempted to show the beauty of the colors and the forms but also I tried to attract attention of visitors by the meaning behind the appearance. Despite of current calligraphy in Iran, I didn`t focus on calligraphy poets or phrases merely, but I utilize phrases, colors and forms as means to imply the meanings. Trying to improve my artistic skills I attended designing and painting courses.
I have some self-instructed experiences in sculpture and installation. I use simple tools and materials to show my ideas and point of views. Fortunately my works got attention of magazines including “Artist portfolio magazine” and “Hidden Treasure Art Magazine” in which some of my works were published.
One of my goals in presenting these artworks is fetching the art into the public, those whose concern isn`t art and artistic works, through which an artist, can play his/her role in the society and public will touch the art closely and making connection with it, and the artworks make them to think.

Following the goal I held exhibitions not only in galleries (that mostly artists and art lovers go there) but also through the city in public crowded places.
Fortunately the exhibitions attracted the attentions, in this way some newspapers published my interviews. Considering academic perspective, the art works attracted the attention of Prof.Dr.Hamid Reza Shairi( http://www.modares.ac.ir/~shairi ) thus, he accompanying his student, Ms. Zohreh Rahnema presented a paper titled “Cognitive-semantic analysis on moving from quantitative to qualitative time in calligraphy works of Ms. Elham Hamraz” in first national meeting of culture, art and literature semiotics .
I established a gallery in a crowded place in the city in order to familiarize the people with visual arts in which I hold training classes and workshop and my works including paintings, sculptures and installations are presented there.

“Layers of the universe”