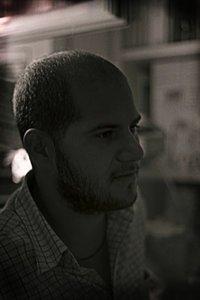 Alessandro Morino (Rome, 1980) graduated in Philosophy at the University of Rome La Sapienza with a thesis on Antonin Artaud. As an autodidact, he has been dedicating himself to poetry and art for several years. He has exposed at the “Antiquarium Comunale” Museum of Sezze and in the following collective expositions: meta.stasi (Comunal area Marie-Renè de La Blanchère, Terracina, 2009), Esthetic Experience (Montoro Gallery in Rome, 2009), and 4th Collective Exposition of the New York Award (Arte Città Amica Gallery, Turin, 2010) 26 Artisti Internazionali (Leonardo Gallery, Lanciano, 2010), Varco Attivo (Collezione Seman Gallery, Rome, 2010), Giovani d’Arte (Museum of Sculpture Hyperspace “A. Pierelli”, Bomarzo 2011), Linguaggi&Personaggi (University of Rome Tor Vergata, 2011). He attended the multimedia event The State Of The Art at Academy of Romania in Rome (2011). Moreover, he has exposed individually at the Contemporary Art Gallery Kunstaus (Rome, 2010). He partecipated at the artistic initiative “Grafitarte De Andrè”, for the realization of a murales in F. De Andrè Square in Rome (2010). In verses he has edited Propriocezione - di un feto riflesso dal limbo di se stesso (Edizioni Polìmata, Roma, 2008) and Nuda Stabat Mater (Ex[t]Ratione – verbal material collection, Edizioni Polimata 2010). He has also partecipated at the installation verbosonore Ci–Gît Viola (Rome, 2005); Costruzione n.1: Nigredo, (Rome, 2008); at the opera-performance Costruzione n.3://La casa dell’incesto (Rome, 2010) with the artistic collective DRAM?MACHINE and at the performative reading Gra.Ma. (Rome, 2010). He has also partecipated at the multimedia collective exhibition The State Of The Art (Academy of Romania in Rome, Dicember 2010) with the video projection of the poetry “Gra.Ma.”. His teste can be found in the magazines: Orizzonti; Gli Internauti; Carte nel Vento and in the volumes Poetici orizzonti; Poesie del Nuovo Millennio; Antologia dei Poeti Italiani Contemporanei; L’Eco del vento.

What is the urgency of the body that manifests itself? Beyond the obstacle of the static, beyond the empty space, set in the anonymous bottom of the canvas. The body, this carnal presence that, forced, returns to be offered, in hold, to the look of who is waiting and watching.
At the bottom of the canvas matter that forms and expands itself. Emanation of an expression that becomes a body, that gives itself a body. Body that advances through the space, that sneaks into the look of who is watching. The presence of the body, this mass clot of forces that is essential. The first shape. The primal event that is encountered, from the origins: experience of all the experiences. The experience of the body as experience of the self, experience of the world and experience of the self in the world. However, this experience is basically an urgency. Urgency of the self, urgency of our own attitude in the world, as part of the world.
The presence of a body that becomes clear. A paleface of purity that is getting ready to the urgency of its – like – birth. But it is already stained with the blood of its own guilt. Responsibility of being a body, of being the concrete event of a system that, on the surface, seems to essentially show the laceration or the pain.