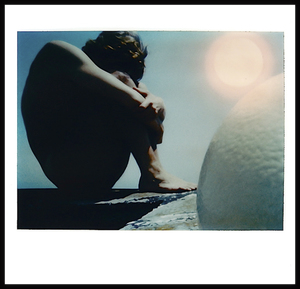 Augusto De Luca, (Napoli, July 1, 1955) is an Italian photographer and performer.  He has taken the portrait of many famous people: Renato Carosone, Rick Wakeman, Carla Fracci, Hermann Nitsch, Pupella Maggio, Giorgio Napolitano, etc. After his classical studies, he graduated in Law.He became a professional photographer in the mid 70’ies. He dedicated himself to traditional photography and to experimentation with many photographic materials. He is internationally known and his exhibitions have been held in many galleries and Museums; he has made commercials, record covers and photo books. His photographs are kept in public and private collections such as the International Polaroid Collection (USA), the Paris National Library, the Rome Municipal Photographic Archive, the China National Aesthetic Arts Gallery (Beijing), the Charleroi Photography Museum (Belgium).-------Self-developing films called Kodak Instant, unlike Polaroids, are rectangular and the image on the surface measures 9 x 6.8 cm.
Kodak introduced its own instant film products in 1976, which was different from Polaroid's in several ways.
Upon introduction of Kodak instant products, Polaroid filed suit against Kodak in 1976 for patent infringement. The case dragged on for years. Kodak lost the dispute, after the ruling in 1985, Kodak announced the discontinuation of their instant photo.Some of these photos have been manipulated with multiple exposures.