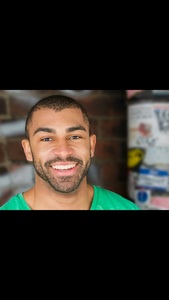 Brooklyn based artist focusing on pop art and abstract expressionism with an purpose rooted in Social Artivism.

This Series is a contemporary acid trip down the Rabbit Hole. It juxtaposes our sociopolitical environment with that of Disney’s Alice in Wonderland. Here we are led through a journey where the ever confused Alice is played by Melania Trump as she ventures through Wonderland, meeting this cast of almost unbelievable characters who rule our world.

In this piece, we meet Melania Trump as Alice, the “protagonist” of the tale. As Alice, she sits unhappily and continues through the labyrinth and the darkness. In her journey she is pushed and pulled by apocryphal characters and here shown surrounded by the both chastising and admiring eyes of the flowers, representing both the paparazzi and the Trump die hard followers.

Though just as crazy, if not more insane, The Mad Hatter’s counterpart, The Mad Hare is the cofounder of the infamous Tea Party and representative chaos that is Wonderland. President Donald Trump helms this madness as the Mad Hare. The intricacies and details of this piece play an overture to 2017-2018. In the background, unbeknownst to Donald, we see the tiki torches of Charlottesville have grown so wild they begin to ignite his beloved confederate flag. In the foreground, Donald uses his tiny hands to command attention and authority as he signs his Executive Order banning minorities, with his trusty water bottle and Twitter bird standing by.

Bernie Sanders is the chosen character for Wonderland’s White Rabbit. With his bloodshot and tired eyes, he’s continuously running policitcally and metaphorically, and always just a little too late for when he was needed most. As signified by the lack of hands on his pocket watch, his time has run out.

Kim Jon Un stands with crown, and fists pumping in triumph as he boasts in his Mad rage as the Red Queen. He and the card soldiers cheer in their castle with painted red roses after they have launched their nuclear missile. The detonator is made by Acme as an allusion to Wile E Coyote and the foreshadowing of a failed attack. The mid air missile is labeled “Sony”, as a reference to the hacking and drama from Sony’s “The Interview.”