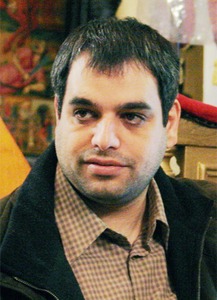 In 1968 I started my journey through life at Nazareth. I have studied computer science and I work as Software Developer, but my heart is where my art is. I started writing poetry in 1990, and doing art using the computer in 1994 and sometime combined both, in 1996 I had my first exhibition, and since then I exhibited my work in many galleries and museums. I went to Germany in March 2001, where I now live and work.

In 2006 I started doing film, starting with my award wining documentary The Sons of Eilaboun ( http://SonsofEilaboun.com ), followed by two short films, and other planed projects. I combine my poetry and visual art in my films, one example is the short film just another day, where the since were build in the style of my art, and my art was used to decorate the walls, and two of my poems were used in the film. http://HishamZreiq.com/justanotherday

My art is a private perspective on life ( http://HishamZreiq.com ), private pains and disappointments, society, Death and a philosophical look at life. Death is the source for creation and the motor of life. Crucifixion a symbol for pain, pain caused by social, political and religious systems.

I think that art is another way to communicate, to express my ideas , for me art should have a message of a sort. This is the way I saw art when I was a little boy trying to express his Ideas with simple drawings, and this is the way I see art when working on my digital art or writing poetry today. Some times I ask myself, if we can reach people through "reason"! but I think its better to get to people's hearts through emotions, through ART, and from there we might get to their reason. Or maybe use extremes in art - and that is what I usually try - in order to make people think and ponder after their emotions become tens. Then their analyses might bring with it reasoning.