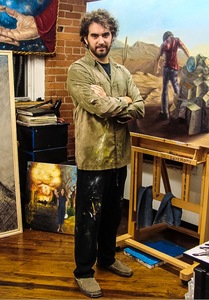 Claudio Altesor was born in Montevideo, Uruguay, on March 20th 1981. During his adolescence he began to take drawing classes in Maldonado, Uruguay.

His first painting classes were with the artist Derrick Quarles in Stamford, Connecticut. In the past several years Claudio has studied at Silvermine Art Guild, Greenwich Art Society, School of Visual Arts, and New York Academy of Art.

At the same time, his work has been selected for exhibitions in Connecticut and New York City, including the Bendheim Gallery Flynn Gallery in Greenwich, CT; and the Sheraton Hotel, the Ferguson Library, The Stamford Art Association, the Palace Theatre and the UConn Gallery, all in Stamford, CT.

He was also the Art Assistant for the photo realistic painter, Steve Smulka from 2006 to 2009, now Claudio creates paintings on commissions.

Since he began surrealistic painting several years ago, he has focused on existential themes that involve human being.