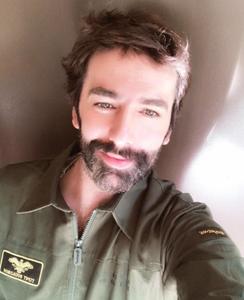 WWW.JOEABOUJAWDEH.COM
Lebanese contemporary artist based in Los Angeles, inspired by Jean Michel Basquiat’s freestyle and loving Frida Kahlo’s power and passion, Joe’s paintings are always full of original characters and abstract forms that capture the painter’s views about life and the world around him.

Joe discovers his talent early on. Born in Lebanon 1982 in Deir EL Harf. He grew up in an endlessly inspiring pine tree village in the Metn province. During his childhood, Joe used to accompany his mother Therese to work. As a singer, Therese’s environment was full of artists, backstage people, and make-up artists, light engineers, all of whom influenced Joe’s appreciation of light, colors, and design. By the age of 5, Joe was already creating interesting drawings on cardboards–really anything he could sketch on– or putting together stones in the form of abstract objects.

At 10, in the midst of the Lebanese war, Joe went to boarding school at Johann Ludwig Schneller Schule in the Bekaa region. Far from the comfort of home and his family, Joe discovered how mysterious life can be, exposed to life games that the other kids had been through. Controversial life stories inspired Joe to dedicate his life in art and painting. His teacher, Syrian artist Ashraf Elias, helped him master his raw talent, encouraging Joe’s parents to buy him all kinds of drawing material as their son was “a little genius in the making.”

For Joe, painting is therapeutic, but it should also carry a message or support a cause. “I don’t think about painting as ‘art’ it’s more about the person or the story. I would like people to be moved, through my paintings, to take action and help improve the world. I have lots of messages to send—each painting is a message.”

Art lovers in Europe, USA and Middle East have already acknowledged Joe’s talent and appreciated his paintings. In April 2013 Joe exhibits his art at Artheum Gallery during the launch of the Beirut Bloom, a Contemporary Art Fair to celebrate Lebanon and the Middle East’s new generation of artists. One more time, Joe instigates strong wave of acknowledgement and admiration by collectors and media.

In July 2014 Joe exhibits in New York in an Art exhibition named as "Cadences of Color". Showcasing his work in one of the most sophisticated and inspiring galleries of New York City, Agora Gallery, paved the way to entering the global art scene.

“The Garden of Heaven ”