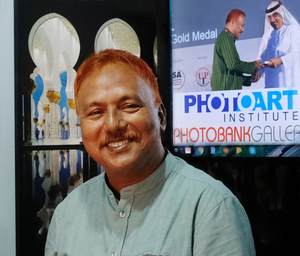 Shoeb Faruquee is a self-accomplished photographer born 1960 in Patiya, Chittagong, Bangladesh. Father Meah Faruquee is a Freedom fighter, veteran politician, writer and columnist. Shoeb started photography in early eighties, though he took it as his whole time passion and profession in 1990. He is the Founder Director of Photobank Gallery a versatile photographic institution including stock photo agency, and Photoart Institute, a teaching and training academy of photography. He is an honorary fellow and advisor of Bangladesh Photographic Society (BPS) also honorary guest teacher of Architecture department of Chittagong University of Engineering & Technology.He is also a guest lecturer at Fashion and Technology department of Port City International University, Chittagong, Bangladesh,

He was a Member of the Juries for several national and international photography contests. He has conducted different photographic workshops home and abroad. His photographs are published in such prestigious and renowned dailies, magazines and journals around the world such as Stern, Geo, Telegraph, New Internationalist Magazine, Readers Digest Australia, and many others. His works on ‘Ship Breaking Yard in Chittagong' have been exhibited at World Press Photo Award Days at Felix Meritis, Amsterdam, The Netherlands, 2005. His first solo exhibition entitled ‘Manush’ (Humans) was organized by Alliance Francaise de Chittagong and held in their Gallery in 2009. A photographic presentation of him entitled ‘Evening Photography Talk with the Photographer Shoeb Faruquee’ was held in Dar Ibne Al-Haytham for Visual Arts in Al-Bastakia, Dubai in 2010. His stock images have been used worldwide by the institutions and organizations

It’s a ‘ghee light burning’ ceremony in the name of ‘Baba Lokonath’, who was one of the Greatest Saint in Hindu religion and he told to his followers that ‘whenever you are in danger - remember me, I will save you.’ His millions of followers in whole Bangladesh pray in his name with spiritual concentration to save themselves from evils and to fulfil their desire.
It’s a special prayer session for Hindu religion people who follows Baba Lokonaths idealism. This special prayer took place on Every Saturday and Tuesday of last 15 days of Bengali calendar month Karthik.
Before the Puja day, devotees take only vegetables for 24 hours. On the puja day devotees have to fast to take part of this special Puja which continues from late afternoon to early evening.