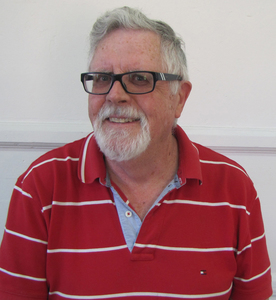 In 2000, after a long career in graphic design and publishing, Robert returned to his studio in Sydney to take up painting and etching full time.
Since that time he has exhibited at various galleries in Sydney, taken part in successful group exhibitions and entered works in many community art shows.
Successes include prizes for printmaking from the Drummoyne Art Society, The City of Ryde, Blacktown Arts Prize, Willoughby Arts Centre and Waverley Woollahra Art School. In 2005 the Broken Hill Regional Gallery acquired one of Robert’s etchings for its permanent collection and in 2010 he was the winner of the Ewart Art Prize and the Print Prize, awarded by the Willoughby Arts Centre. In 2018 he won the Award of Excellence at the Glebe Art Show.
Robert has had a long association with the Waverley Woollahra Art School, where he has studied etching and life drawing since 2001. As well as studying and occasionally teaching at WWAS, he is currently a member of the Board and is curator of its very successful 9x5 Art Prize.
Since 2001 Robert has travelled to many parts of Australia and overseas collecting material for his paintings and etchings.