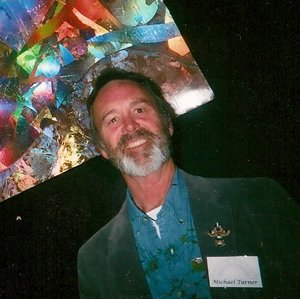 Michael has been a resident of Arizona for 60 years, leaving only from 1965 to 1969 to serve in the Navy. After the Navy, he attended Arizona State University. Michael moved back to the Verde Valley in the early 70s. He started doing stained glass in 1976, later expanding his art to include three-dimensional pieces using another form of glasswork. He has worked with beveled-edge glass and UV- activated glues.

In the nineties Michael began lampwork, enjoying the freedom this type of glass work gave him. In addition he spends time and energy in marble making.

Over the years Michael has been painting in one form or another. With a move to Missouri, when cold weather prevented him from working with his glass, he went back to painting. He, subsequently, in September 2001 held a one-man show. The show included some of his glass work, sculpture, ceramics, and paints.

In the Spring of 2001 Michael's "Grove in Snow" painting took second place overall show at the Richmond Mushroom Art Festival Art Show (It is now in a private collection). His two sculpture took first and second place. Later in the year, two of his paintings were included in the Missouri State Fair Art show (one of those paintings, "Star Dancer" is now in a private collection and has been donated to the Carrollton Library Children’s section)

Michael was one of 32 Kansas City area artists asked to participate in a fund raising event with the Kansas City Symphony in 2003. His contribution was a coronet that combined Mylar, Plexiglas and hand formed marbles. This piece was selected by Hallmark on the Plaza to be displayed in their store as representation of the art work in the auction. Michael’s coronet sold at a gala dinner/auction benefit.

A move back to Arizona in 2003 brought much needed studio space and a chance to introduce his art style to a larger audience. His first offering in his home state was in the 17th annual Made in Clarkdale art show in December of 2003. Michael has been involved with the Made In Clarkdale show every year since then. 2004 brought an association with the El Valle artists group. Michael has also participated in the First Friday Art Walks in downtown Phoenix, and the Fort Verde Days annual art show.

During 2005 Michael’s art work was requested to be on displayed at a Frankfort Indiana art show to benefit the Frankfort Library during a Christmas event.

2006 brought lots of avenues for discovery. Michael participated in his first show in Sedona at Talaquapaque with the Sedona Visual Artists Coalition. The 2006 Fort Verde days art show asked Michael if he would consent to be the featured artist. Michael agreed and used the two days to demonstrate his lampworking and talk to people about is unusual medium.

Michael continues to expand and refine his work and because of his use of unusual materials and innovative processes his art work requires more than a passing glance.

See some of Michael's art "in motion" at youtube

Rainbow Mylar is light reflective, so will change color as light moves across it. The holographic effect continually redefines the work.