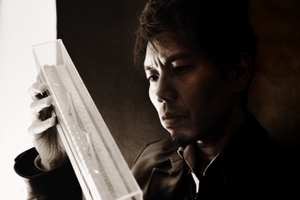 Dr. Akira TAKAUE is an International Award-Winning Photographer.
Fortunately experiencing precious opportunities to visit various places around the world for business trip, in which actively would like to pursuit taking impressive worldwide scenery and modern architectures filled with emotional colors or black and white with delicate contrast and vibrant composition.

My goal is rooted in both the logic of structural mechanics and material engineering as well as the finer artistic elements that make a building and its photograph successful.

“Back to Human Life”

Rainbow bridge located at the entrance structure of the Tokyo bay is one of the typical beautiful suspension bridges in Japan. The superstructure consists of double deck road and railway. There are a lot of photos of rainbow bridge including illuminations on the opposite side such as Fuji-Television in public but this composition has not been seen anywhere. I'm a bridge designer, so wanted to put an important point of the detailed structure of the trussed superstructure and lighted white tower to the composition.

This blue colored illuminated bridge is a steel arched bridge, constructed in 1926, named Eitaibashi bridge in Tokyo located near Tsukishima skyscraper. Of course this bridge is really famous for the illumination so there are a lot of concerned photos in the internet, but I do not like most of their post editing and composition. I've been wanted to get one by my own capability. Finally I did it.

“To the Vague World”

“To the Vague World Mk.II”

“A Shadow of Urban Area”

“The Stairs to the Moon”

“Multiple Lights from the Heaven”

“A World of Rounds”

“The Portal for Rising”

“The Portal for Silver Mountains”

“A Joyful Day in Urban Matrix”

“With the Couple of Jovian and Lunar Lights”

This shot was taken under the brilliant moon light by 5-minutes long exposure using remote controlling. Additionally I have carried out post-processing very carefully, which results that the rocks detail and other tones have cleared vividly. Although this shot was rejected in 1x.com, this is one of my favorites.
Thanks!

“Isolation in a Blue World”

“To the Vast Twilight Ocean”

“A Presence on the Planet Earth”