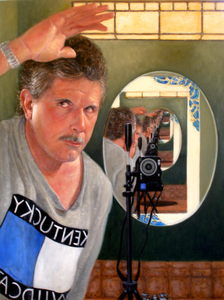 Born in the small town of Waterbury Connecticut, Donelli J. DiMaria has been drawing and painting from the age of 8. While primarily self-taught, he has had some formal training in classical and contemporary art at different points throughout his life while living in Connecticut and New York. Although, Donelli has drawn and painted his entire life, he pursued a career in science. He received a Ph.D. in Physics from Lehigh University, Pennsylvania, and went on to work as a Physicist for IBM's major research lab the T. J. Watson Research Center in New York for many years. During his time as a leading research scientist for IBM, Donelli created a major field in the area of solid-state physics making significant worldwide contributions to science and technology. Simultaneously, he continued to study and develop his drawing and painting techniques with the ultimate goal of a second career as an artist.

While working as a physicist, Donelli also accrued many national and local awards for his paintings. Among juried national competition, he has been a finalist in The Artist's Magazine National Juried Competition for Dream Studio twice in a three-year period and has been accepted in the national shows of Allied Artists, American Artists Professional League, Hudson Valley Art Association, Salon International, Oil Painters of America, and Academic Artists. He was also selected and published as an Artist Showcase Award Winner in the Manhattan Arts International Magazine twice. Donelli's self-portrait has been published in American Artist Magazine, one of his paintings appears in North Light Books' "The Best of Portrait Painting “, and several others have been published in “American Art Collector” . He was a fellow member of the American Artists Professional League, Associate member of Oil Painters of America, member of the Portrait Society, and elected full member of the Hudson Valley Art Association and Kent Art Association.

Over the years, Donelli has developed a distinctive painting style most appropriately characterized as Contemporary Realism. To this end, he blends the techniques of the old world masters line, form, edge and value with the brushstrokes, vibrating colors and light effects of the Impressionists. However, the distinctive contemporary nature of Donelli's unique style is in his compositions and paint application.


The ideas for his compositions come largely from photographs and memorabilia collected while traveling around the world as a research scientist. Donelli sets up the subject matter for his paintings to tell a story. Typically, he emphasizes the main point by using a palette of earth colors for most of the painting with a punch of bright color, such as red to attract the viewer's attention. Thick paint application, detail and value contrast are also used to attract the viewer to the center of interest. He layers color upon color allowing each layer to show through to increase the light, luminosity and emotional intensity of his work.

For the past 17 years, Donelli has been a full time artist and teacher in Santa Fe, NM. Recently, he has been in 14 museum shows across the country (twice in the “Contemporary American Realism” show at the Fort Wayne Museum of Art in 2008 and 2010) and has shown his work in galleries across the US (NY, CA, AZ, TX, CT, and NM). His four drawing and painting video courses on “Udemy” have more than 100,000 subscribers, and his drawing manual loosely based on the “Reilly” technique is still available on “Lulu” and at Artisan stores.

Oil paintings on canvas or linen.

Oil painting of art collector viewing one of my social realism paintings of three African women.