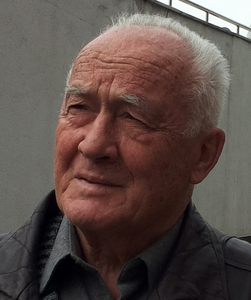 Aharon April is a former Russian artist and contemporary Israeli artist born in Lithuania in 1932. April's works are in the major public and private collections in Europe, Russia and United States. 48 of April's works are exhibited in various museums around the world.April was born in Vilkaviškis, Lithuania in 1932 to a Jewish family. Aprils' family was exiled to Siberia in 1941, where he grew up and got his first impressions of the bleak color emanating from the northern land. In 1948, he managed to enter the Moscow Art School in Memory of 1905, from where he had to return to Siberia after the Soviet authorities had launched an anti-Semitic campaign known as “The Doctors’ Plot.” April graduated from an art school in the city of Yakutsk. He pursued his interest in history by attending lectures at a local pedagogical institute. An opportunity to study in Moscow arose after the death of Stalin and in 1960, April graduated from the Surikov Academy of Fine Arts. In 1972 April immigrated to Israel where he still lives.
The art style of Aaron April moves from contemplative figurativism to expressive symbolism. April’s paintings impress with their colorful, temperamental riot of colors(Victoria Khan-Magomedova). However, within this chaos, one can find subject and content. Critics (Victoria Khan-Magomedova, Mathy Fisher) noted that Aharon April is one of those artists who can tame the chaos, prompting viewers to formulate answers to the questions posed by the artistic work, and solve the mystery of it. There lies the leading value of the artwork.(Salvator Daly and others). From the seemingly erratic pulsating strokes, one can discover crop faces, figures and even biblical characters.(Efgraf Kontchin). Color in April’s paintings has special meaning (largely because of extensive experience in watercolor), which combines the finest nuances of color combination of Mideteranian nature and compositions involving biblical and universal themes.(Wladimir Prokhorov, Mathy Fisher).