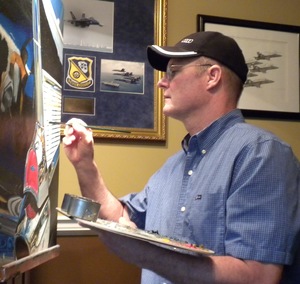 An Interior Design graduate from the Art Institute of Fort Lauderdale, Rick worked for architects and designers in South Florida before opening his own design firm in Fort Lauderdale in 1985. After Desert Storm, his love of aircraft and patriotism guided him to enlist in the Navy for the opportunity to serve his country. This was to be a temporary detour from his chosen career path. 26 years later he is still in the Navy!

His artistic endeavors took pause, but did not falter. As a member of the Naval Flight Demonstration Team, Blue Angels, Rick produced numerous renderings of the F/A-18 “Hornet” in pen and ink. His drawings led to his watercolors and finally oil paintings. The three “A’s”, Aircraft, Automobiles and Architecture were his main subjects of interest. This led to his portraiture paintings. His work plays on the use of shadow and reflection to create intensity and balance.

“As an interior designer, clients would often try to select art that worked with their interior color pallet. Artwork should evoke a feeling, a reaction, or a thought process. If art does that, it doesn’t matter what color the matte is, hang it and enjoy.”

Rick's work is in private collections around the world.